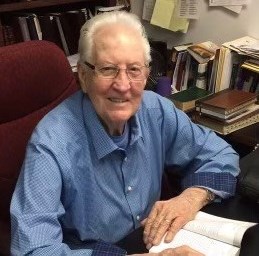 Richard Carr, 86 from Sarasota, formerly of NJ and Massachusetts, went to his heavenly home on January 20, 2023. He was born in Providence, RI on May 15, 1936, son of the late Raymond B. Carr and Wilma (Deacon) Carr. He was a custom home builder until 1982 when he attended Bible college to become a minister. He founded New Life Worship Center where he was the pastor for 39 years. He was an athlete in high school, served in the Army as a paratrooper and MP. He returned home to attend college when he met his wife of 65 years, Deanna Carr. They had 4 children, 5 grandchildren and hundreds of spiritual children. He leaves behind his wife, his brother Marc Carr, his son Steven Carr & daughter-in-law Cynthia, his son Jeff Carr and daughter-in-law Lecia. His daughters Dianne Trefz and son-in-law Vinton and daughter Cindy Wright. He loved his grandchildren. They were the apple of his eye, Parker Trefz, Jordan Carr, and Zachariah, Noah, & Mckayla Carr. A committal service will be held on Thursday, February 2, 2023 at 2:30 PM at Sarasota National Cemetery, 9810 State Rd. 72, Sarasota, FL 34241. A Celebration of Life Service will be held on Saturday, February 4, 2023 at 4:00 pm at New Life Worship Center, 2105 Worrington Street, Sarasota, FL 34231. In lieu of flowers the family requests contributions be made to New Life Worship Center's Food Pantry. (2105 Worrington Street Sarasota Fl 34231) For online tributes, please visit www.rtsfunerals.com
See more See Less

In Memory Of Richard M. Carr