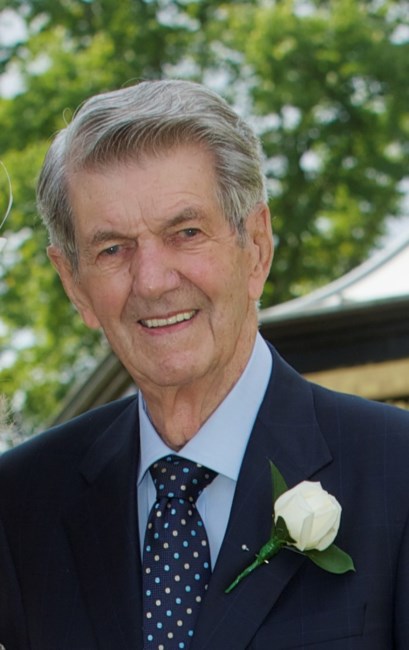 Bryan was born on April 2, 1924 in Dana Saskatchewan. He passed away peacefully with family by his side on September 8, 2022. Bryan lived the majority of his life in Leslie and Foam Lake. He and Evelyn moved to Saskatoon in the mid-1990s. He was a proud Airforce veteran having signed up in and received his pilot’s wings in 1944. In April of that year, his service took him to India where he was posted with the RAF #354 Squadron flying B24 Liberators along the Burma Coast. He met the love of his life, Evelyn, in April 1947 and married her 3 months later. They enjoyed 66 years together – 50 of which they lived in Foam Lake. They were both very active in the community taking on leadership roles in the Legion in particular and Bryan was given a Life Membership in recognition of his efforts. He enjoyed curling, golf, skating and in the early years established the local Cadet Corp. He was a lifelong Saskatchewan Roughrider fan and a die-hard Montreal Canadien supporter. Bryan was a Member of the Legislative Assembly from 1964 to 1969 and worked hard for his constituency and to help the area prosper. In 1967 he sold his general insurance business and moved full time into selling life insurance with Mutual Life of Canada and remained a financial advisor until he retired at 70. He was at his happiest when surrounded by friends and family. He could always find a group of friends to share coffee stories with, be it the McDonald’s or the Foam Lake groups in Saskatoon or ‘coffee row’ in Foam Lake. He loved family above all else. His children, three grandchildren and their spouses and six great grandchildren brought him tremendous joy. He was a kind, generous and thoughtful man who was a much loved father, grandfather, great grandfather, brother, uncle, cousin and friend. He will be greatly missed by many. He enjoyed a full life . . . well lived and full of love. Bryan was predeceased by his beloved Evelyn (2013) and son in law Graeme (2022), is survived by his sister Audrey Anderson; daughter Svava Davies; son Arni and DeeDee Bjarnason and family - Jaime and Todd Kaufman (Riley, Sophie and Anna), Christopher (Ty and Emry), and Leanne and Andrew (Nixxon). Donations in Bryan’s memory may be made in support of the Foam Lake Legion or a charity of your choice. No flowers please. A Celebration of Bryan’s Life will be held in Saskatoon on Monday October 17, 2022 at 1:30 p.m. at Windsor Chapel (704 Windsor Street). Arrangements entrusted to David Polzen
See more See Less

In Memory Of Bryan Harvey Bjarnason