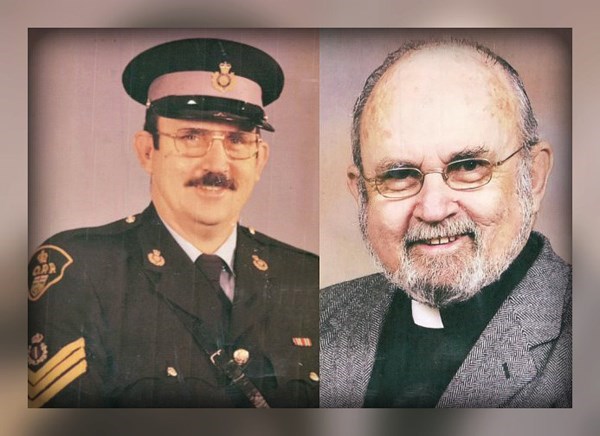 FEX, Robert (Bob) Rev Mr. - It is with heavy hearts that we have lost our father who was the husband of the late Joanna (Gant). The loving father of Robert Michael (Heather) of Barrie and Richard of London. Loving grandfather of Tyler Boston of Sault Ste. Marie, Luke & Rene Fex of Barrie, Jessica, Jazmyn and Jayden Fex of London. Robert dearly loved his family which included his Parish family of Our Lady of Good Counsel where he served as a deacon with his great friend Fr. Roy McParland for over 25 years. Robert was born and raised in Windsor, Ont. and in 1947 at age 17 joined the Royal Canadian Navy serving during the Korean war. After serving in the navy for five years he joined the Ontario Provincial Police in 1953 serving until 1985. He started his OPP career in Cornwall on highway patrol and then transferring to the forensic identification unit. It was here in Cornwall that he met and eventually married Joanna in 1960. During the 1950's he was an active SCUBA diver as a hobby and underwater searches for the OPP. He also was an instructor for the local air cadet squadron in Cornwall. In 1964 he was promoted and transferred to Sault Ste. Marie in charge of the identification unit. Robert was active in the community, being instrumental in starting the Youth Basketball Association (YBA) at the local YMCA. He also started a youth air rifle safety course at the YMCA. He taught hunter safety for the MNR for many years. As a deacon he served as a member of the Marriage Tribunal for over 25 years yet when not busy joined his wife in gardening which they both enjoyed. Robert was an ardent modeller in any spare time he had. All said and done Robert loved his Lord, life, his family and friends dearly and will be greatly missed....... Friends may visit at the Arthur Funeral Home - Barton & Kiteley Chapel (492 Wellington Street E. 705-759-2522) on Monday, January 6, 2020 from 6 - 9 pm. Funeral mass to be celebrated from Our Lady Of Good Counsel Church on Tuesday, January 7, 2020 at 10 am. Rev. Paul Conway officiating. Interment Holy Sepulchre Cemetery. Please visit Arthur Funeral Home - Barton & Kiteley Chapel website obituaries to leave condolence messages as a keepsake for the family. Memorial contributions (payable by cheque) to ARCH would be appreciated. At the going down of the sun And in the morning We will remember them Members of the Legion Branch 25 are requested to assemble at the Arthur Funeral Home - Barton & Kiteley Chapel on Monday, January 6, 2020 at 5:45 pm for a memorial service for the late Robert Fex.
See more See Less

In Memory Of Robert Fex