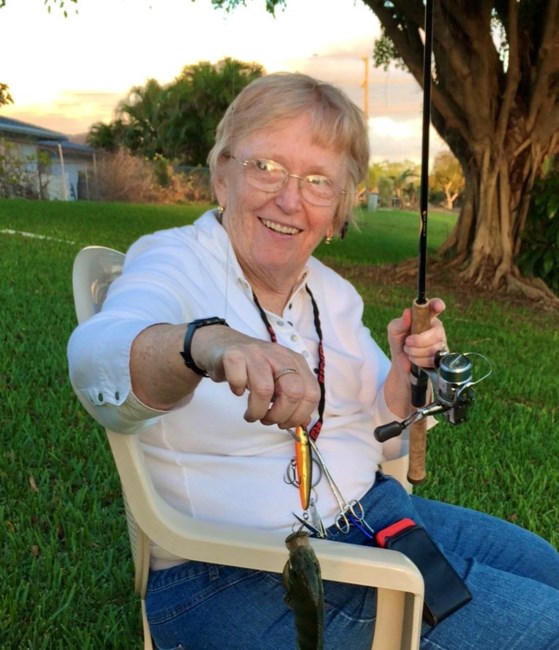 Marilee “Mal” Ann (née McKeever) Caliendo of Scituate, MA and Jupiter, FL departed our earthly shores for everlasting heavenly seas on May 5, 2022 at the age of 79. She was born in 1942 to the late Marion and Raymond McKeever. She grew up in Arlington, MA and spent her summers in Scituate, MA. She attended the Massachusetts College of Arts and Design where she received a BFA degree majoring in Painting and Illustration. She married David Caliendo in 1967 and they had a daughter, Frances Caliendo Kistner who resides in Wayland, MA. Marilee is survived by her daughter Frances and son-in-law Kenneth. She was a “wicked cool Nana” to grandchildren Kenneth Kistner Jr, and Megan Kistner and several great-grand fish; a beloved sister-in-law to Donna Poland and Elaine McKeever, and a fun Auntie to Betsy Bauer, Susan Bauer, Raymond McKeever, Lanie Anderson, Michael Poland and David Poland. Marilee was preceded in death by her brother Thomas, her long-time partner Walter Ungermann, her sister-in-law Carol Rosen, and her nephew Harlan “Hardy'' Bauer, Starting in 1964, Marilee began her career as a biomedical photographer, working with Ferdinand Harding at Children’s Hospital in Boston, MA. She was a member of the Biological Photographers Association and was the first woman to be admitted by examination. Marilee was a highly respected member of the BPA, rising to the Board of Directors and also being an Examiner for Candidates hopeful to join the Association. She received the Ralph Creer award, one of the highest recognitions in her field. Marilee left Children’s to open the Department of Biomedical Media at the new University of Massachusetts Hospital in Worcester, MA. Some years later, she moved to Florida and ran the media department of Cleveland Clinic and then the same at Florida Atlantic University. Instead of retiring after a long career as a medical photographer, Marilee went to work for FEMA documenting the aftermath of storms and natural disasters across the country. Outside of work, Marilee loved the ocean, and sailing and traveling whenever possible. One can only imagine the tales of adventure from her travels with Judy, Carol, and Sally and David. Marilee was known for her extraordinary talent, her cooking and her humor. She was fearless. A true role model, mentor, and all-around brilliant woman, Marilee enjoyed a good party, especially Fantasy Fest and the Mardi Gras beads! Marilee’s passions included her grandchildren, fishing, sailing, fishing, SCUBA, fishing, swimming and fishing. She was the first female member of the Satuit Boat Club in the 1980’s, as well as an active member of the Coral Ridge Power Squadron in the 1990’s. She was a trusted and loyal friend to many, especially her longtime friends Nancy, Mary, Sue, Helene, and Judy. Relatives and friends are invited to celebrate Marilee’s life on Sunday, May 15, 2022 from 1:00 PM to 5:00 PM at Richardson-Gaffey Funeral Home, 382 First Parish Rd, Scituate, Massachusetts 02066. A funeral home service will occur Monday, May 16, 2022 at 10:00 AM, 382 First Parish Rd, Scituate, Massachusetts 02066, followed by interment at St Mary's Cemetery, Meeting House Lane, Scituate, Massachusetts. In lieu of flowers, please consider a memorial contribution to the Lewy Body Dementia Association, the International OCD Foundation, or the US Youth Fly Fishing Team.
See more See Less

In Memory Of Marilee A. (McKeever) Caliendo