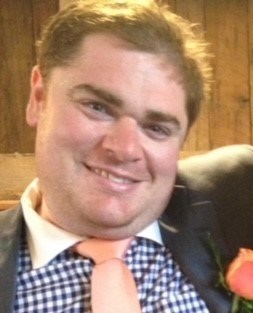 Tyler Ray Longland October 8, 1985 – November 29, 2021 We are deeply saddened by the passing of Tyler at the age of 36. Tyler is survived by his beloved fiancé Sarah Hughes of Scituate, MA, his pup Carolina, The Hughes family: Paul and Meg Hughes of Duxbury, MA, Elizabeth Hughes of Scituate and Mark and Kara Hughes of Plymouth his Coach and mentor Dan Murphy, his parents Jorie Hunken of Woodstock, CT and David Longland of Sudbury, MA and his sister Molly Longland Baker and husband Ray Baker of Brooklyn, CT. Also, his grandparents, Jane Irving of New York and Theresa Longland of Sudbury. He was pre-deceased by his birth mother Patty Anderson of Hull, MA. Tyler is also leaving so many friends that meant the world to him. Tyler grew up in Woodstock, CT and attended Woodstock Public Schools before experiencing a life changing journey at Hyde School in his high school years. He graduated with honors from Hyde in 2003 with a distinguished record of athletic achievement on the varsity football, wrestling and lacrosse teams which included being the wrestling team MVP his senior year. Hyde provided mentors in his life, and he developed the leaderships skills that would lead to his successes as a scholar/athlete at UCONN and in the business world as well. Tyler loved lacrosse and attended numerous NCAA Championships in his young life. After playing lacrosse at UCONN he was hired by Woodstock Academy to be their varsity lacrosse coach in the spring of 2009. Ty loved his lacrosse boys and they adored him. He related well to these teens at Woodstock Academy, and they thrived in his three years as their head coach. Tyler relocated to the Hull, MA to connect with his birth mother Patty Anderson in 2011 and start his career in business. He loved being close to Boston and being able to get to Fenway Park, Gillette Stadium and TD Garden to see his beloved Sox, Pats, Bruins and Celts! The 12 championships for Boston teams since 2001 was a source of great joy in his life, and of course bragging rights with his friends from other major sports markets! Tyler also continued to play lacrosse on some club teams and was a dependable goalie for his grateful teammates. Tyler developed a love of snowboarding in his early 20s and became a Coach at Okemo Mountain in VT, and then moved to Loon Mountain where he coached from 2014 - 2018. His young pupils called their beloved coach “Uncle BUCK” because he was so young at heart and willing to make snowboarding and any activity so much fun. He leaves behind a huge extended family up at Loon who loved him dearly including the Bouressa family who housed him on his weekends up there. Tyler met the love of his life Sarah Hughes in 2014. They had an incredibly special bond immediately; he was her whole heart and she was his biggest fan. Whether they were having drinks at L Street Tavern, watching Boston sports, or Tyler was cooking them a homemade meal, they always found a way to enjoy being together. The Hughes family loved Tyler from day one and he was at their Christmas dinner table within weeks. Their family became his family and he and Sarah enjoyed years of adventures with them. Tyler suffered an unexpected terrible stroke in January 2018 which set him back in many ways. Despite the challenges, it was truly remarkable everything he was able to overcome. During that time, he received incredible care from Boston Medical Center, Spaulding Charlestown and Tewksbury Hospital. We are incredibly thankful for all of those who took care of him during those times until he came home. The family is having a service at Richardson-Gaffey in Scituate, MA on Saturday, December 4th from 4-5:30pm followed by a reception. In lieu of the flowers, please consider donating to the Pat Roche Hospice Home in Hingham, MA.
See more See Less

In Memory Of Tyler Ray Longland