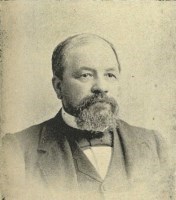 Early Seattle lawyer, businessman, and civic activist who was instrumental in shaping much of the Seattle area. Thomas Burke was born in Clinton County, New York, on December 22, 1849, to strong Irish antecedents. After graduating from Ypsilanti Academy in Michigan, Burke was encouraged by family friends, a married couple named Bagley, to study law. Shortly after completing his studies, Burke was elected city attorney of Marshall, Michigan. When he was 25, the Bagley's, both of whom were doctors, convinced Burke to move to their new place of residence, Seattle. The young lawyer borrowed some money for the trip and arrived by ship in 1875. Within a couple of years Burke was elected probate judge and he later served three months as Chief Justice of Washington State Territory. He was sworn in as chief justice on December 22, 1888, and resigned in March of 1889, citing that his annual income was reduced from $27,000 at his law firm to only $3,000 as chief justice. Ten years earlier, on October 5, 1879, he had married Caroline E. McGilvra, daughter of Judge John J. McGilvra and sister of Oliver C. McGilvra, one of Burke's best known law partners. During the 1880s, logging and coal mining were the area's top industries. Judge Burke saw the need for a major railroad line through Seattle, but he opposed the methods and Tacoma route of the Northern Pacific Railroad, so he and investor Daniel H. Gilman established their own railroad on April 15, 1885. By 1887, their Seattle, Lake Shore & Eastern Railway ran from Columbia Street and Western Avenue, along Railroad Avenue (now Alaskan Way), to Lake Union's north shore and along the east side of Lake Washington, with plans to continue across Snoqualmie Pass to Walla Walla, which was a major hub of agriculture and one of the state's largest cities at the time. While they also planned to extend north to connect with the Canadian Pacific Railway, they never built past Arlington. Even though it never reached beyond the Puget Sound area, by the time SLS & ER was acquired in 1892 - by the very railroad Burke had opposed - it had already made a significant contribution to our area's early growth. Judge Burke was later retained by James J. Hill to help bring the Great Northern Railway to Seattle and the two existing railroads later merged to become today's Burlington Northern Railroad, which abandoned the railway route built earlier by Burke and Gilman. Their defunct line's right of way was later purchased and turned into a series of public paths for pedestrians and bicyclists, which we know as the very popular Burke-Gilman Trail, as well as the Sammamish River Trail and Centennial Trail. In addition to serving on the bench and starting his own railroad, Burke supported higher education and was very involved in developing our school system. Judge Burke also had a reputation as an eloquent speaker, leading some to compare him to Patrick Henry. In February 1886, during the infamous anti-Chinese riots, the judge gave a very memorable speech whereby he strongly encouraged hostile Seattle citizens to embrace racial tolerance. Judge Burke, whose stately memorial was designed by famous architect Carl F. Gould*, made many contributions well over a century ago, which are still benefiting us today. *Also mentioned in "Doughboy" info.
See more See Less

In Memory Of Judge Thomas Burke