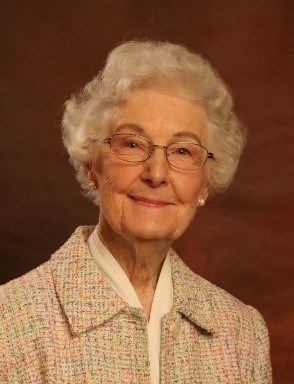 Margaret Riese joined the heavenly home prepared by the Lord she loved on January 14, 2022 with family at her side. She was born in Olathe, Kansas to the Rev. Melvin Jameson and Eleanor Bodle Jameson on December 19, 1927. Her father passed away in 1937 and her mother moved Margaret and 2 sisters to her hometown, Seattle, WA. She was a member of the Roosevelt High School class of 1945 and graduated with honors from the University of Washington in 1949, earning a degree in Home Economics. She taught Home Economics at a Junior High School in Bothell, WA until her marriage to Raymond Riese in August of 1951. Margaret and Ray moved to San Anselmo, CA where Ray studied at San Francisco Theological Seminary. Their twin sons, Mark and Stephen Riese were born in January 1953. Later daughters Merrilee and Robyn joined their family. The Rieses served churches in St, Anthony, Idaho, Pilot Rock, OR, Trinity Presbyterian in Seattle, WA, Easton, CA, Yakima, WA, Terrace Heights, WA and Calvin Presbyterian, in Shoreline, WA. Margaret enjoyed her life as a Pastor’s wife and used her talents as a pianist to accompany Ray on violin and vocal solos. Margaret is also remembered as a fine Bible Study teacher which was a favorite part of her life. The Rieses traveled widely to visit Presbyterian Missions and led many tours of Europe, the Holy Land, and numerous other countries. Margaret was active in Women’s AGLOW and P.E.O. and was active in her church groups. The Rieses moved to Cristwood Park, Shoreline, WA an independent Retirement community in 2000. Margaret was active on many committees and choir. Margaret was preceded in death by her husband, Raymond, sons Mark Riese and Stephen Riese, sister Bernice Jameson Wood. Surviving are daughters Merrilee Johnson, Robyn Albert (Louis). Daughter-in-law Karen Riese, Grandchildren: William Riese, Andrew (Beka) Riese, Katherine Evans (Zach), Elizabeth Riese, Sarah Riese, Alyssa Justice (Sam), Ryane Albert, 3 great grandchildren and sister, Marilyn Snow. A Service celebrating the Resurrection of Jesus and Margaret’s life will be held Saturday, March 5, 2022 at 3 pm at Calvin Presbyterian Church, 18826 3rd Avenue NW, Shoreline, WA 98177. Remembrances may be made payable to: Encompass World Partners, P O Box 3298, Monument, Co 80132 ATTN: For The Ministry of Andrew and Beka Riese Fond memories and expressions of sympathy may be shared below for the Riese family.
See more See Less

In Memory Of Margaret Jameson Riese