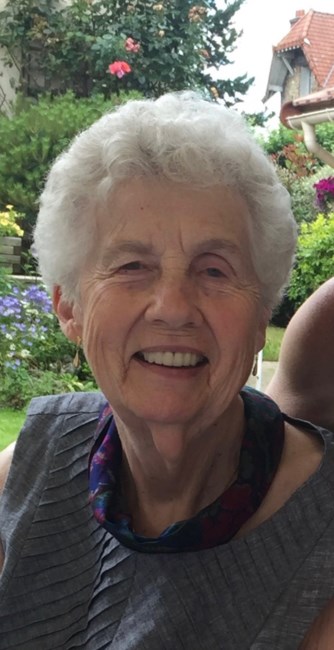 Eleanor Ann Yale Austin, age 90, of North Bethesda, Maryland, passed peacefully at home on the morning of January 15, 2023. Eleanor born on June 30, 1932 in Middlefield, Connecticut to Robert and Catharine Yale. She was a graduate of Connecticut Teachers’ College where she met the love of her life, Dr. Gilbert Austin, to whom she was married for almost 70 years. Together, Eleanor and Gil, traveled the world living, working and visiting destinations such as France, Australia, China, and Cyprus, as well as much of The United States. Eleanor worked as an editor and production head for Westat Corporation, and had a passion for DIY - building houses, painting, wallpapering, reading, music, baking, and gardening. Upon retiring, she spent many years volunteering as a reading coach for elementary school students. Eleanor was extremely active in her church serving in a variety of leadership roles and most importantly singing in the choir. Eleanor’s greatest source of pride was her children, grandchildren and great grandchildren. Eleanor is survived by her husband, Gil, her children Sara Patterson (Karl Foertschbeck) Elizabeth Austin (Denis Chauveau), Gilbert Austin Jr. (Donna Meyers), Mary Austin (John Franco); brothers Robert Yale (Marjorie) and Richard Yale (MaryAnn), and a host of adoring grandchildren, great grandchildren, nieces, nephews and cousins. A memorial service for Eleanor will be held at Pilgrim United Church of Christ, 2206 Briggs Road, Silver Spring, Maryland, 20906 at 2:00 pm on Saturday the 28th of January 2023. A reception will follow the service. In lieu of flowers, donations in Eleanor's name may be made to Reading is Fundamental, Special Olympics or The Heifer Project International.
See more See Less

In Memory Of Eleanor Y. Austin