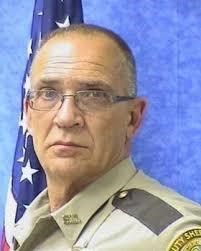 NORRIDGEWOCK – Corporal Eugene P. Cole, 61, ended his watch on April 25, 2018 when he was killed in the line of duty. Gene was born in Skowhegan on Oct 7, 1956, the son of Philip E. and Gloria (Baker) Cole. He was raised in Skowhegan and Madison, and he graduated from Madison Area High School, class of 1974. After serving in the United States Army, Gene returned to home and married Sheryl Smith. They eventually built a home in Norridgewock where they raised their four children. Gene owned and operated a television repair shop in Skowhegan and then moved the shop to Norridgewock. After closing his business in 2000, Gene pursued his calling to become a law enforcement officer. He graduated from the Maine Criminal Justice Academy’s 10th Basic Law Enforcement Training Program in 2006, and then he went on to work as a rural patrol deputy for Somerset County Sheriff’s Office. After five years of working the road full time, he was promoted to the supervisory position of Corporal. In this role, Gene mentored many deputies and he was a constant source of advice and support for all of the area’s law enforcement officers. It felt like Gene knew everyone in “the county,” and he rarely passed up the opportunity to share a story or two. He was well-known, loved and respected by the community he gave his life to serve and protect. Although dedicated to his work, Gene was equally devoted to his family. They could always count on him to be there when they called. His strong and constant presence in their lives will always be missed. Gene was widely known in the community as a talented musician. He sang, played guitar and wrote songs. As a lead guitarist, he played with Borderline Express for over 20 years, and after his retirement from the group in 1994 he continued to fill in for them occasionally. Most recently, Gene and his brother Tom, known as “The Cole Brothers,” played at T&B’s every month. Gene is survived by his loving wife of 41 years, Sheryl (Smith) Cole; children, Philip Cole and his wife Alexandra of NC, Joseph Cole and his wife Laurie of Waterville, David Cole and his wife Kim of Skowhegan, and Jillanne Cole of Norridgewock; grandchildren, Christopher, Anna, William Joseph, Kaitlyn, Zach, Whitney, Jamison, Aly and Liam; mother, Gloria Cole; brother, Tom Cole and his wife Linda of Skowhegan; sister, Sherryl Sirois of Skowhegan; several nieces and nephews; and a large extended family that includes his law enforcement family and the many musicians that he played with over the years. Gene was predeceased by his father, Philip and his brothers, William and Fred. Visiting hours will be held from 4-7pm, Sunday, May 6 at the Skowhegan Armory, 11 North School Street, Skowhegan. A celebration of Gene’s life will be held at 12pm, Monday, May 7 at the Cross Insurance Center, 515 Main Street, Bangor, Maine with Chaplain Kevin Brooks officiating. In honor of Gene’s dedication to his community, memorial contributions may be sent to the Corporal Eugene Cole Memorial Fund, c/o Bangor Savings Bank, 113 Madison Ave., Skowhegan, ME 04976. Gene’s family extends their deepest appreciation to their community members who have surrounded them with love and compassion in the last week. The family is especially thankful to the law enforcement officers who are working tirelessly and keeping watch. Arrangements are under the care and director of Smart & Edwards Funeral Home, Skowhegan. And although I am but one man, I have thousands of brothers and sisters who are the same as me. They will lay down their lives for me, and I them. We stand watch together. The thin-blue-line, protecting the good from the bad. We are the police.
See more See Less

In Memory Of Cpl. Eugene Cole