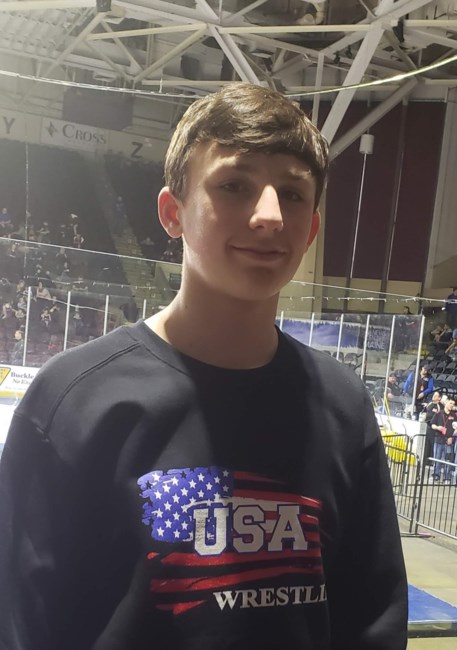 SKOWHEGAN & DEER ISLE – John Edward Hovey, IV, 13, passed away unexpectedly from injuries sustained in a dirt bike accident on July 1, 2019. He was born on October 15, 2005 the son of Janine Stadig and John Hovey III. To say John was a busy kid, was an understatement on all accounts. While he didn’t exactly enjoy being confined within the walls of the Skowhegan schools, John loved learning real world skills. From infancy, John was on the construction site with his father, and as a preschooler he was often at the diner with his mom. He could accurately read a tape measure at a young age and he was able to work alongside grown men and hold his own. Whether John was building houses or working as a stern man on a lobster boat, he had a heart for hard work and learning everything he could. He loved to tell people all about lobstering. At the diner, he would step in and help his mom when she needed it or socialize with customers in the morning before school. John did all of the things Maine boys love to do: hunting, fishing, snowmobiling and ATVing. He was known for being a real wise guy and clowning around. His sassy mouth sometimes got him in trouble, but he was quick to be forgiven because everything was done just to get a laugh. It was like he was trying to fit 40 years of living into the too-short 13 years he was given. Most importantly, John had a deep love for his family and friends. He was especially close with his younger brother, Jacob – a tie that can never be broken. So, maybe John talked Jacob into acting out a bit, but everything ended in a big laugh, always. He will always be missed by his mother, Janine Stadig and her boyfriend Craig Judkins; father, John Hovey, III and his girlfriend, Debbie Fifield; siblings, Mikhayla Welsch, Caitlyn Welsch, Jacob Stadig and Tyler Judkins; maternal grandparents, Lee and Alice Stadig and Ron and Sheila Williams; paternal grandparents, Lynda and Victor Crane; aunts and uncles; Chris and Marcia Hovey, Amanda Hovey, Peggy and David Madore, Renee and Daniel Sterling, Tyler Williams and Jessica Dixon; a large extended family; and his many friends in Skowhegan and Deer Isle. He was predeceased by his paternal grandfather, John Hovey, Jr. Family and friends are invited to celebrate John’s life at 4pm, Wednesday, July 10 at the Skowhegan Federated Church with Rev. Mark Tanner officiating. After the short formal service, everyone is invited to a more casual gathering on the back lawn and inside Tewksbury Hall which is located behind the church. John’s family hopes that his many friends will come and share their stories and memories of this amazing young man who has left us far too soon.
See more See Less