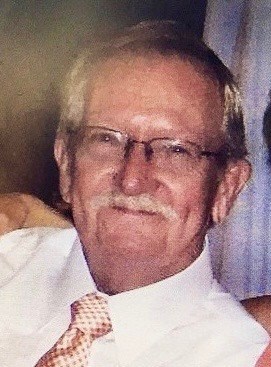 Richard J. Glover, of Winslow Maine, passed away peacefully on July 28, at Androscoggin Hospice in Auburn. Born in Bridgeport, Ct. on January 16, 1940, Dick was 82 years old. His parents were Frederick and Eleanor Glover. Dick grew up in Connecticut where he attended and graduated from Devry Tech Institute. He also attended the University of Connecticut, where he excelled in Track & Field. Every Summer, Dick would travel to East Madison to spend time with his grandparents and help out on the farm. His ‘Nana’ & ‘Gramp’ were very influential in shaping the wonderful man that he became. During his summer visits to Maine, Dick met the love of his life, Nancy. They were married at Notre Dame de Lourdes church on May 28, 1960 and thereafter moved to Norwalk Connecticut, where Dick worked for Nash Engineering. He began his longtime position with Sherwin Williams in 1962, once returning to Maine, until retirement in 1996. The couple settled in Auburn, where they raised their family. The drums were Dick’s passion. He had played with a jazz band in Connecticut, and then played with several Country Bands here, in Maine. Dick also taught drum lessons at a Lewiston studio. He was very proud of the fact that there were 4 drummers in his family: his Uncle Joe, his son Rick, his great grandson Bryson, & himself. Dick was a member of the Kiwanis Club in Madison, where he was President for 2 years. He was also a member of the Skowhegan-Madison Elks, and his genuinely caring heart led him to volunteer for many organizations. Dick and Nancy loved their homes, on Lake Wesserunsett. This is where the couple hosted yearly July 4th family reunions. After retirement, Dick enjoyed his home workshop, where he cleverly designed and built several pieces of furniture. Among his many joys, was sitting down with a good book - often chosen from his extensive collection. Together, they enjoyed wintering in Florida for 9 years, where they golfed and traveled. He knew how to make everyone around him laugh. He also had a more serious side, and he was always willing to impart wisdom, whenever asked. He is survived by his devoted and loving wife, Nancy, and their three children: Richard Glover, Jr. & wife Celeste of Old Orchard Beach, Kelly Seegmiller and husband Robert of Marana AZ and Madison ME, Debbie Vickers and husband David of Azle, TX. Dick also leaves behind 5 granddaughters: Michelle Love & fiance Nick Allen, Nicole O’Brien & husband Michael, Savanah Behan & husband Brian, Alyssa Larson & husband Blake, and Brianna Santos & husband Julian, as well as 5 great grandchildren: Liam Love, Fin Love, Bryson Carter, Charlie Wilder, and Norah Jo Santos. He is also survived by his brother, Robert Glover & wife Jodi, sister-in-law Kathy LaGasse & husband Edward, three nephews, 2 godchildren, & several cousins. Dick was predeceased by his parents, and a special cousin, Shirley Hodgdon. Arrangements are under the care and direction of Smart & Edwards Funeral Home in Skowhegan. There will be a Memorial Service at the funeral home on Thursday, August 11, at 1:00 pm, followed by a Celebration of Life at 2:00 pm at The Heritage House in Skowhegan. Condolences may be offered at www.smartandedwardsFH.com Dick’s family would like to thank Dr. Nora Glasspool, Dr. Rebecca Spear, and the Androscoggin Hospice of Auburn for the kind and compassionate care they extended to Dick and his family. We will forever be grateful for you. In lieu of flowers, please make contributions in memory of Dick Glover to the Dementia Society of America at www.dementiasociety.org/donate. “So we do not focus on what is seen, but on what is unseen. For what is seen is temporary, but what is unseen is eternal.” 2 Corinthians 4:18
See more See Less

In Memory Of Richard James Glover