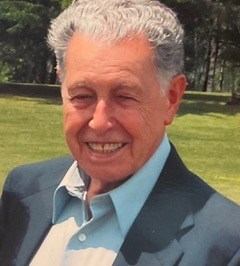 Luiz Gouveia, age 101 of Dartmouth, passed away peacefully at home on Wednesday morning, September 14, 2022 with his wife Rose (Moniz) Gouveia by his side. Together they shared a remarkable 71 years of marriage. He was born in New Bedford, the son of the late Luiz Miguel Gouveia and the late Maria (Texeira Nunes) Gouveia. At the age of four he traveled to Madeira with his two oldest siblings when their parents returned to their home there. In 1942, at 21 years of age, Luiz and his 19 year old brother Cil made a dangerous transatlantic voyage when called to service as American citizens during World War II. Unable to qualify for service for medical reasons, Luiz spent the remainder of the war earning recognition for his dedicated efforts producing war supplies at Firestone Manufacturing. With his education limited by his father in Madeira, Luiz advanced from sweeping floors and running as a “bobbin boy” in the Berkshire Hathaway cotton mills in New Bedford simply by observing and mastering his co-workers tasks. With that knowledge he would then bid on open positions, finishing his career there as a loom fixer. When the company moved its operations south, Luiz was employed by Continental Screw Co. in New Bedford, as a machinist for several years until his retirement when the factory closed. Luiz was an avid gardener, keeping a large vegetable garden, multiple fruit trees and of course a grape vine. He happily shared his produce with friends and family. He took great pride in producing traditional Madeira wine and delighted in sharing a glass with all who came to visit. A long time member of Club Sport Madeirense in New Bedford, Luiz was very proud of his Madeiran heritage. He served as a “festeiro” for the Feast of The Blessed Sacrament in New Bedford in 1948. In addition to his loving wife, he is survived by his son L. Michael Gouveia, DMD and his wife Linda of S. Dartmouth; two grandchildren Olivia and Peter Worden; two sisters Maria Alice Gomes of Florham Park, New Jersey and Dolores A. Nunes of New Bedford, his sister-in-law Mary Gouveia of Castro Valley, California and many nieces and nephews. Mr. Gouveia was the brother of the late Celestino and Fernando Gouveia. Relatives and friends are invited to attend his Mass of Christian Burial on Monday, September 19, 2022 at 10AM in St. Julie Billiart Church, 494 Slocum Rd., Dartmouth. At the family’s request, guests are asked to please wear a mask while in church. In lieu of flowers, memorial contributions in his honor may be made to the American Heart Association, PO Box 840692, Dallas, TX 75284 or to The Michael J. Fox Foundation, P.O. Box 5014, Hagerstown, MD 21741. For directions or to place an online tribute, please visit: www.waring-sullivan.com
See more See Less

In Memory Of Luiz Gouveia