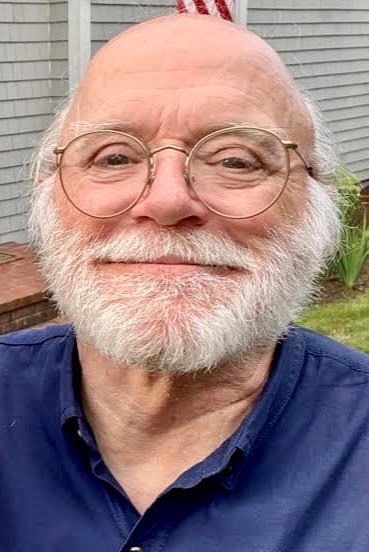 Yarmouth Port- Mr. John Conant Whitmarsh, age 77, died on January 30th, 2022. He is survived by daughters Elizabeth (Whitmarsh) Frattasio of Hanover and Claire (Whitmarsh) Gold of Norwood. In addition, he leaves behind two devoted sons-in-law, and five loving grandchildren. Mr. Whitmarsh was born on September 27, 1944, in Hartford to parents Earleen (Fairweather) and Harold Conant Whitmarsh. John married the love of his life, Joelle (LeClair) Whitmarsh in 1969, and they lived happily together for nearly 45 years. She passed away in 2013 at age 67. The son of an Episcopal priest, Mr. Whitmarsh grew up in the Tri State area. He attended Pingree School for Boys in Elizabeth, New Jersey for 12 years. He then went on to earn a B.A. degree in English from Hobart College and a M.A. degree in Journalism from the Syracuse University Newhouse School of Journalism. Prior to attending graduate school, Mr. Whitmarsh enrolled in Officer Candidate School and then served in Vietnam as a decorated combat infantry Lieutenant in the United States Army from 1968-1969. John held top editorial positions on nine national trade and consumer newspapers, magazines, and newsletters in New York, Chicago, and Boston. In the high-tech publishing industry, he served as editor-in-chief of Computerworld newspaper from 1979-1985 and editorial director of CIO Magazine. In retirement, John pursued his lifelong love of photography, and devoted his time to honing his craft of photo impressionism. He was inspired by the raw beauty of Cape Cod and his images of local seascapes and various landmarks became a full time focus which in turn introduced him to a community of artists with whom he enjoyed both comradery and a combined passion for their work. Over the past several years, John’s work has been featured in several Cape galleries and was regularly commissioned by enthusiastic customers. John discovered photography with his father, who gave him his first Kodak Brownie camera when he was 10. Together, they set up a wet darkroom and began making their own prints. Photography was more than a calling; he found the process of seeking out scenes and capturing them to be liberating. “I’m alone and totally focused on being in the now.” he said. John (“Poppy”) will be missed dearly. His gentle nature and sharp wit were a delight to everyone who knew him. John loved to listen to other people tell their stories and was never anxious to be the center of attention. He was a voracious reader with an insatiable curiosity on many subjects. He adored music, his coin collection, his cameras, the English language, and all things Apple. His love for his daughters knew no bounds, they were the light of his life. His generosity was endless, and his thoughtful nature favored friends and strangers alike. He will continue to be a model of dignity and benevolence to those of us who loved him most. A funeral service will be held at St. Mary’s Episcopal Church in Barnstable, Massachusetts on February 15th at 10:00 am. Due to Covid protocols, we ask that only immediately family and close friends attend. Burial will be private following the service at Four Corners Cemetery in Middletown, Rhode Island. In lieu of flowers, donations to the Multiple Myeloma Research Foundation are appreciated.
See more See Less

In Memory Of John C. Whitmarsh