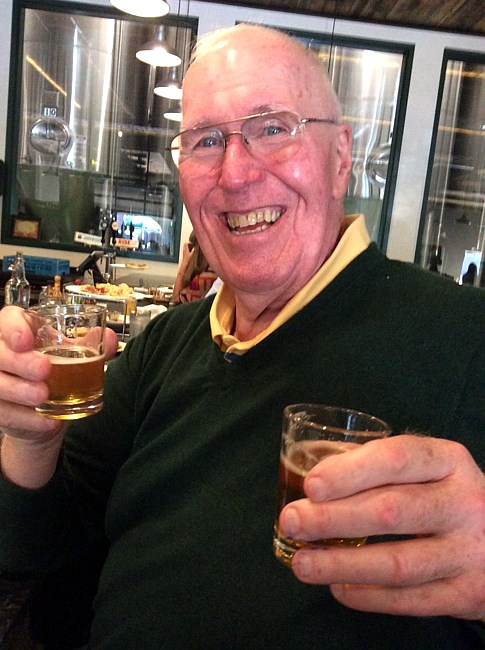 Thomas Paul Maguire Jr., age 78 of South Weymouth, unexpectedly passed away on January 20, 2022. Tom was born and raised in Charlestown Massachusetts, a place that stayed close to his heart. He began his lifelong passion for swimming at the Boys Club in Charlestown and by dipping in the Mystic River, which he fondly called the oily’s in reference to its less than pristine cleanliness. He continued swimming throughout his life and was thrilled to reach his goal of 368 miles in 2021. He began his career as a telephone man climbing the poles and scaling wires in Boston’s North End. He went on to work for New England Telephone (aka Ma Bell), AT&T - and finally the Cape Cod Hospital. He was a collector of beer steins, which he displayed in his home, and beer, which he displayed in his belly. He was a skilled mixologist, never letting juice or a cheese and cracker just be. He loved music, particularly the popular songs from his youth, and couldn’t hear “Ghost Riders in the Sky” without singing along. He was a big man with a big personality. His sense of humor was unrivaled and he was never without a good comeback. He could be easily spotted in a crowd by looking for the pom-pom atop his flat cap. He is survived by his truly beloved wife of nearly 53 years Margaret, his five children Anne, Thomas III, Erin, Eric and Kathleen, 5 grandchildren and 2 great grandchildren. He was preceded in death by his daughter Moira. He loved his children dearly and they mutually agreed to continue abiding by his two golden rules: 1. Dad’s always right 2. If Dad is wrong, refer to rule 1. The service will be held at Doane, Beal & Ames, 729 Route 134, S.Dennis, MA 02660 on January 25, 2022 at 12 noon preceded by a gathering of family and friends from 11-12 noon. A private family burial will immediately follow at Dennis Village Cemetery.
See more See Less