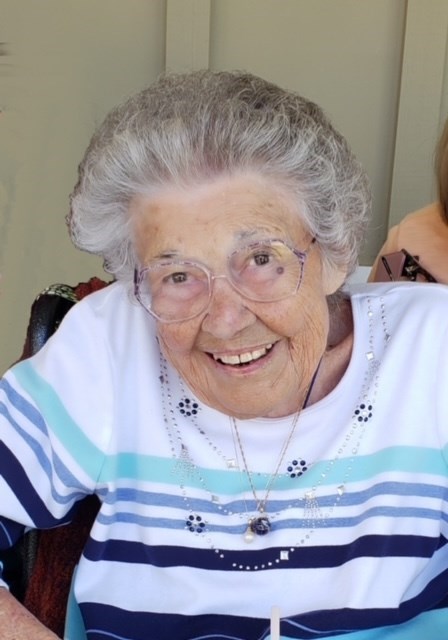 Ruth Cornelia (nee Brundage) Hamilton, went to be with her husband Edgar in heaven on Saturday, May 7th. She was a devoted wife, loving mother of three, grandmother of seven and great grandmother of 17. Ruth was born in New York City on December 11, 1921. She was very proud of the fact her birthdate (121121) formed a Palindromic number – a number that remains the same even when the digits are reversed. She attended school first on Staten Island but graduated from high school in the Bronx at Evander Childs High School at the age of sixteen. Ruth went to work for Bell Labs in Manhattan following High School as soon as she was old enough to work. She later met her future husband in Queens Village, NY and they married on June 14, 1947. Ruth and Ed raised their three children in New Hyde Park, NY. They provided them with the most incredible memories of vacations in Mattituck, NY as well as to New Hampshire and Maine. Ruth was also a Girl Scout Leader and a Cub Scout Leader. They were active in the Hillside Methodist Church serving as Sunday School Teachers, Youth Fellowship Directors and she was a member of the Church Choir. In the mid 1970’s they moved to Cold Spring Hills, NY where they became members of the Woodside UMC. Tragically Ruth was widowed in 1979. She continued to work for several more years until her retirement from the New York Board of Cooperative Education Services (BOCES). She filled her time with travelling around the country to see her grandchildren and great grandchildren. She retired to Aiken, SC where she lived for over 30 years. In Aiken she was a member of St. John’s United Methodist Church. She volunteered at Aiken Regional Medical Center for many years. She lived independently in her home until 2019, when at the age of 97, she moved to Arbor Landing in Shallotte, NC to be closer to family. She enjoyed her final years, making many new friends that she cherished, and they cherished her. She attended Village Point United Methodist Church until COVID hit and then continued to listen to services online on most Sundays while eating her Bagel and Cream Cheese. Ruth touched so many lives. She lived life to the fullest; even travelling in Europe into her 80’s. She never met a stranger, and she was an incredible listener. Whenever you met her, the first thing she wanted to know was “how are you?” – it was never about her. As someone said, “she was a beautiful woman from the inside out”. She was a shining example of a life well lived and how to love and care for others. She was predeceased by her father Herbert W. Brundage, her mother Emma Brendel Brundage, sister Evelyn A. Brundage and Ruth’s husband, Edgar W. Hamilton. She is survived by her daughters, Nancy E. Wolf (and husband Edward), Phyllis A. Clark (and husband Robert); a son Richard K. Hamilton (and wife Marie), seven grandchildren, Matthew Wolf, Timothy Wolf (and wife Judi), Tracey Sain (and husband Jason), Alison Ricker (and husband Joseph), Amy Hilliard (and husband Hank), Erin Hamilton and Lauren Hamilton as well as 17 great grandchildren. A memorial service will be held at a future date at the Village Point UMC in Shallotte, NC. Burial will take place at the Dutch Reformed Cemetery in Germantown, NY at later date. In lieu of flowers, please make donations in memory of Ruth to either the SECU Hospice House of Brunswick in Bolivia, NC; Village Point United Methodist Church, Shallotte, NC or St. John’s United Methodist Church, Aiken, SC. Fond memories and expressions of sympathy may be shared at www.peacocknewnamwhite.com for the Hamilton family. Peacock - Newnam & White Funeral and Cremation Service, Southport, North Carolina.
See more See Less

In Memory Of Ruth Brundage Hamilton