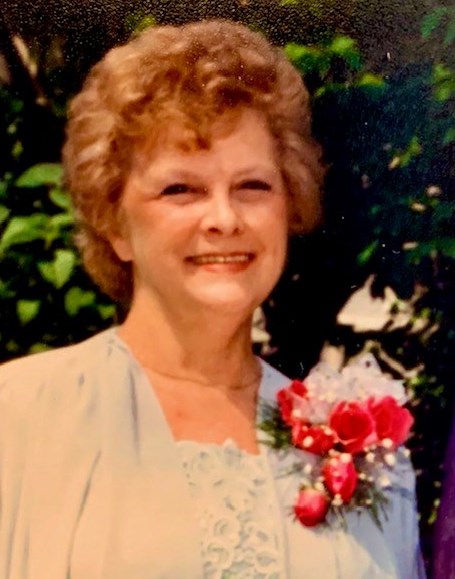 Lily Ann Repasch (nee LeVan), born on December 10, 1935, died peacefully March 23rd, 2020 at 84 years of age following a long battle with dementia. Lily was born in Reading, PA and raised in Fountain Hill, Bethlehem, PA. She graduated from Fountain Hill High School, where to no surprise to those who knew her she was lauded for her amazing sense of humor and was voted most talkative. In 1964, she married Mike Repasch, and they eventually moved to Sparta, where they lived for almost 50 years and raised their four children. Lily was witty, fun, and full of life. She loved to knit, sew, smoke (if only to annoy us sometimes), bake, watch The Big Bang Theory and complain about Sheldon, and most of all, spend time with her family. She loved cooking pork chops and scalloped potatoes, fried chicken, spaghetti, and her signature lasagna for her family, annual shore vacations in Wildwood, Christmas Eve mayhem on Oak Tree Lane, taking trips to 7-11 for Pepsi, Parliaments, and scratch-offs, and hanging with her beloved furry friends, especially her Siamese furry babies and her little orange tabby, Junior. Lily held many positions in life which she loved, including working for Bell Telephone, as an upholsterer and seamstress, and as a Girl Scout Leader. Lily’s most memorable job was with Sparta Lanes, where she spent decades ruling over the Snack Bar, which she used as a launchpad to tease everyone, torture the owners, and bring mayhem and laughter to the bowlers and her coworkers, who she always considered family. She knew everybody and she loved to be around people, even children (even though she claimed they drove her crazy). Everyone loved to be with and around Lily. Lily never had a lot of material things, nor did she want them, but what she had she shared generously with her family and friends. She was a deeply gifted knitter who knitted mittens, scarves, sweaters, blankets, and her signature Christmas stockings for family and friends. She was an unmatched baker of delicious cupcakes, pies, candy, donuts, and cakes. She was a talented seamstress who made school clothes, prom and wedding gowns, cat toys, dresses, shorts, elaborate Halloween costumes, and stuffed animals. She was a proud grandmother who gave up her personal time to be a patient (well, she tried) babysitter to her grandchildren. And in her last years, Lily was a caretaker for her husband Mike as he suffered through Alzheimer’s. Lily leaves a legacy of often wildly inappropriate humor, kindness, generosity, and the ability to swear in ways heretofore unknown. She will be deeply missed by everyone who knew and loved her. She was predeceased by her husband Mike, her brother David, her son-in-law John Mooney, her daughter-in-law Donna Slate Repasch, and her niece Dawn LeVan Clark. She is survived by her children and their families, Dana Merville Mooney and her partner in crime, Andy Berardinelli, of Sparta, NJ, Dana’s children, Jessica and Mark Merville and Mike and Matt Mooney; Donna Griff and her husband Stan, of Byram, NJ, their son Jonny and daughter Megan and her partner against crime, Rob Tighe; her mini version, Lee Repasch of Denver, CO; and her son, Michael Repasch of Newton, NJ and his children Mikey and Donny. She is also survived by her sisters-in-law, Margaret Dales of North Carolina and Gail LeVan of Bethlehem, PA, her nieces and nephews and their families, and many friends who we all now consider family. She is also survived by her beloved cat and Siamese terror, Charlie Cat, who now resides in Denver, CO with Lee, where he is slowly driving her crazy, as Lily surely would have wanted. A celebration of Lily’s life will be held once all threats of COVID-19 have passed. Watch for updates on the Goble Funeral Home of Sparta website or on our family’s Facebook pages.
See more See Less

In Memory Of Lily Ann Repasch