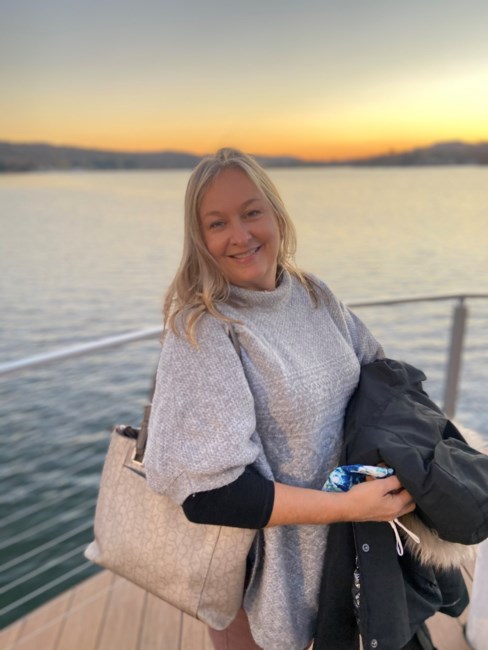 Elaine “Louise” Shepherd passed away on Monday, September 26th, at Westchester Medical Center in Valhalla, New York surrounded by her loving family after suffering a severe brain hemorrhage and cardiac arrest while driving home from a weekend in Boston. Louise was a caring wife, mother, daughter, sister, aunt, and friend. She left this world far too soon at age 57. She was born to Alan and Dorothy Hitchens on April 24, 1965, in Stakeford, Northumberland, England. After attending Bedlington High School, Louise graduated with distinction in Nursery Nursing – NNEB from Northumberland College in Ashington. In 1985, Louise left England for a “6 month” job in the US working as a nanny. Six months became several years, and she eventually met her husband, Scott Shepherd. Scott and Louise were married on July 6, 1991 and had 2 sons - Jake and Brandon. After her boys were born, Louise juggled the duties of motherhood with attending college and received her Bachelor’s degree from Centenary College in 2010. She also earned a Master’s degree from TCNJ. Louise was a beloved teacher in the Sparta school district. She joined Sparta after her graduation from Centenary, first as a special education teacher and then moved into the 4th grade classroom as an ELA teacher. She loved the Sparta school family and all of her students. She poured her heart into teaching and always found ways to encourage her students to be creative and think for themselves. She made school fun for the kids whether it was running the classroom like a small economy or teaching with Mr. and Mrs. Pickles, Super Pickles, and Baby Bob. Louise loved spending time with her family, both here in the US and traveling back to England. She had a great love of the outdoors whether it was spending time in her zen garden by the pool, boating, hiking, or biking. She enjoyed traveling as well with some of her favorite vacation spots being the Lake District in Cumbria, Coastal Northumberland, and Cape Cod. Louise was full of life. She was kind and loving, the rock of our family. Her beautiful smile and laughter as well as her incredible sense of humor were infectious. The outpouring of love and support over the past week has been overwhelming but shows how many lives she truly touched. Louise is survived by her husband of 31 years, Scott, her sons Jake (26) and Brandon (23), her mother Dorothy, her brother Andrew and his wife Cally, 6 nieces and nephews, great nieces and nephews, cousins and all of the extended Shepherd in-law family. A memorial visitation will be held at Goble Funeral Home in Sparta, NJ from 4-8 pm on October 7, 2022. There will also be a Celebration of Life at the Sussex United Methodist Church in Sussex, NJ at 2pm on October 8, 2022 . In lieu of flowers, contributions can me made to the Louise Shepherd Memorial Scholarship Fund which is currently being established.
See more See Less

In Memory Of Louise Shepherd