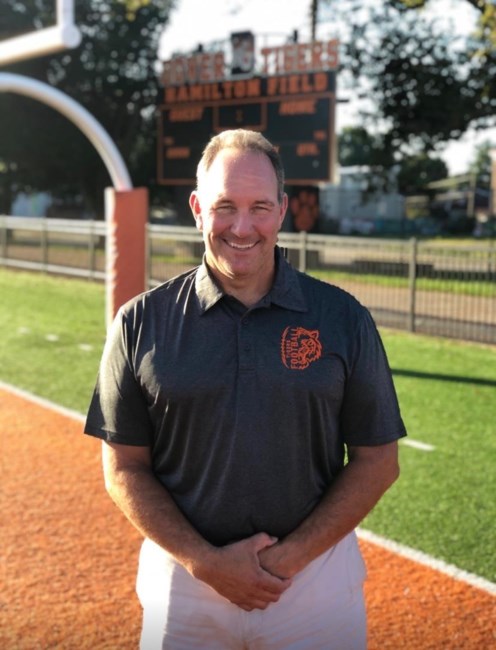 Robert Gerard Ambrosino passed away Monday, September 27th, at Overlook Medical Center in Summit, New Jersey after suffering a severe brain aneurysm. Robert has been a member of the Sparta community since he was born, attending Sparta school systems all the way until he graduated from Sparta High School in 1984. After high school, he attended the University of Delaware to study Agricultural Business and to be a proud member of their football team. During his college journey, he discovered his passion for inspiring others and decided to change his course and pursue teaching. After graduating, he came back to his roots in Sparta and taught marketing and finance, before switching to Dover High School where he continued to inspire young students with his teaching. He also coached football and softball for the Sparta High School, as well as many youth programs like recreational and Diamonds softball, which his children were actively involved in. At Dover High School, he coached the football, softball, and more recently the basketball team. Beyond his influence in the classroom and on the field, Rob was known as a local celebrity. He devoted a lot of his time to the popular open mic night hosted at the Lake Mohawk Country Club, as well as many more events there. He also played gigs for many restaurants and parties in Sparta and the towns surrounding. Rob had a passion for music and fell in love with sharing this joy with everyone who came out to jam with him. He was not only a musician, teacher, and coach, but he was also a husband and father. He raised three kids Erika (20), Lauren (17), and Robbie(13) with his wife Kristina. Kristina and Rob were married 21 years. He enjoyed using his love of teaching and instilling his own passions into his kids, as he became their mentor for the many sports and musical programs that his children also learned to enjoy. He touched every person's life in more ways than just the traditional role he was supposed to play. He truly had a way with words and knew exactly how to make others feel special. He was arguably the biggest part of any community he blessed us with- whether that be Sparta athletics, Dover athletics, a respected and basically home-town famous musician, his kid's lives, being a loving husband. Rob is not alone since he has passed on, he will be joining his beloved mother, Carol Ambrosino, and older brother Greg Ambrosino. His radiant personality lives on through his father Jerry Ambrosino, brother Gary Ambrosino, wife Kristina Ambrosino, three beautiful children Erika, Lauren, and Robert Ambrosino, and of course throughout the multiple communities that he graciously gave so much of his time to. The outpouring of love and support that the family of Robert Ambrosino has received from the many different communities he was involved in has been overwhelming and the Ambrosino family could not be more appreciative of all of the thoughts, prayers, and great memories that have been shared. Funeral arrangements are entrusted under Goble Funeral Home 22 Main St., Sparta, NJ 07871. There will be a service held privately for just the immediate family. A celebration of life will be held at a later date.
See more See Less

In Memory Of Robert Gerard Ambrosino