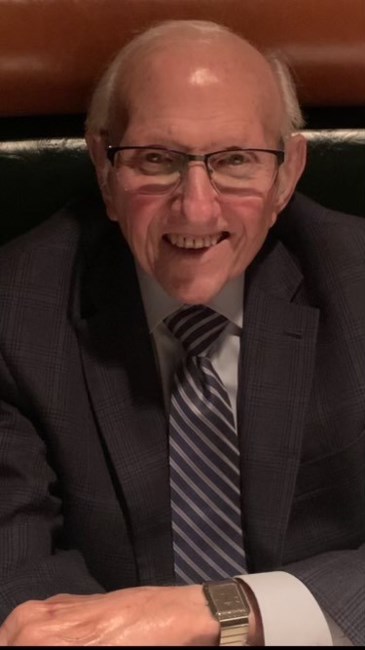 Robert Lewis “Bob” Goemann was born October 6, 1926 in Brooklyn, NY and died on September 20, 2022. He was a loving father and had a life filled with music, crossword puzzles, the NY Giants, and awful jokes. His sense of humor was quick and sharp, liberally sprinkled with puns and blue humor. His love of music is truly what animated his life. The foundations of that love were Jazz and The Great American Songbook. He could listen to this music and swing with it, relax into it and also listen with laser-like intensity, hearing every note, instrument, harmony, and rhythmic change. He loved singing and hanging with musicians and when possible, doing both at the same time. During the second half of his life, he was able to enjoy swinging and singing with numerous jazz greats in clubs in New York City. Bob Goemann worked in the music business and then specifically selling records, first in retail and later wholesale, with the last major portion of his career working for Walt Disney’s records. He then briefly retired before building a second part time career selling furs at Bloomingdale’s, where he found a world of new friends and professional success. He found meaning in work and it took a pandemic to stop him, at 92 years of age. Bob Goemann never graduated high school, having to leave school to help support the family, like many of his generation. He worked hard, loved his family and cheered for the home team. He was a season-ticket holder for his beloved, if often beleaguered, NY Giants for over 30 years, starting in the 60s, a love and disease that he passed on to his children and grandchildren. But he was also uniquely his own man. He lived on his own, in his apartment until the day he died. He worked into his 90s, and exercised on long walks or on the elliptical in his building until very recently, when his illness slowed him down. And although his formal education ended early, his love of learning and growing was lifelong. He was always looking to expand his world, to challenge himself, whether through his daily delivered reading of the NY Times, the challenge of its crossword puzzles, an enjoyment of travel when he was younger, and his constant diet of novels, especially detectives with their twisted puzzles. Pre-pandemic, he was a well-known regular at a local used book store where he would practically buy paperbacks by the pound, and then later, he gained some facility with a Kindle, especially handy during the pandemic. Bob is survived by his three children Richard Goemann (Melissa) of Silver Spring, MD, Carolyn Heaton (Kevin) of Sparkill, NY, and Melissa Anselmi (Michael) of Pearl River, NY.; his grandchildren Laura and Ethan Goemann (Lindsay), Ross, Ryan, and Daniel Heaton, and D’Arcy and Margeaux Anselmi. He was especially proud of becoming a great grandfather to Jonah Goemann. The family asks that Memorial Contributions be made to a charity that was close to Bob’s heart: Jazzmobile. Its mission is to present, preserve, promote and propagate America's classical music, Jazz. https://jazzmobile.org/ Funeral arrangements have been entrusted with Hellman Memorial Chapels, 15 State Street, Spring Valley, NY 10977 (845) 356-8600 Jewish Funeral Directors. Fond memories and expressions of sympathy may be shared at www.hellmanmemorial.com for the Goemann family.
See more See Less

In Memory Of Robert Lewis Goemann