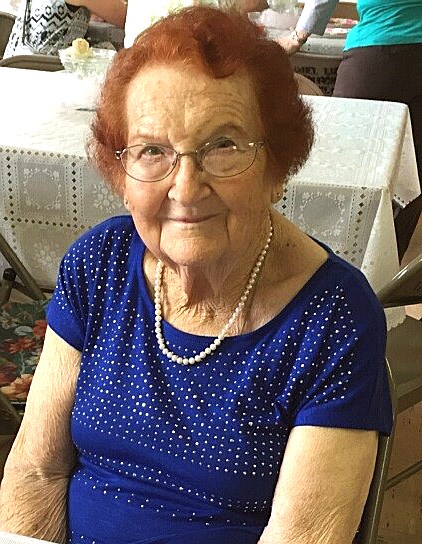 Helen was delivered into this world on June 16, 1920 by her father during a rain storm that prevented the midwife from delivering her. She was the daughter of Henry and Gertrude Gangelhoff of Kroschel, MN. She attended Kroschel Parochial School and later graduated from Hinckley High School. After high school, she worked as a maid and babysitter in Minneapolis for several different families. She later attended Hinckley Teachers Training Department, where she received a teaching certificate. Helen married Rev. Herman Hoffman on June 15, 1940 in Kroschel, MN.

Together, they spent the next 50 years serving the Lord in numerous small town parishes in the state of Minnesota. Helen was very active in all the communities in which they resided. She was instrumental in obtaining a grant from the state of Minnesota to improve the park in Hoffman, MN as part of the Garden Club. She was a member and President of all Ladies Aid groups in every community where they lived. She worked as a cook for 15 years, collectively, in the nursing home in Hoffman, MN, Boarding care home in Bertha, MN and a nursing home in Wadena, MN.

She enjoyed sewing and quilting and belonged to several quilting groups. When she and her husband moved to Springfield, she started the Lutheran World Relief Quilting project at Trinity Lutheran Church, which has over the years, sewn and sent out over 2,000 quilts to various third world countries. To further her passion for sewing, she was responsible, on her own, for sewing over 350 pillow case dresses which were also sent to third world countries.

Helen spent 30 years as a docent at the Governor’s Mansion in Springfield and was interviewed by Dave Baake for the State Journal Register on her experiences while volunteering there.

The Hoffman family will greet family and friends at Bisch Funeral Home West 2931 S. Koke Mill Rd. Springfield, IL from 3:30 -6:00 pm Monday, November 29, 2021. Additional visitation will be from 10:00 am Tuesday, November 30, 2021 until the time of her funeral service at 11:00 am at the funeral home. Rev. Paul Hemenway will officiate. Burial will be in Hillside Cemetery, Minneapolis, MN at a later date. In lieu of flowers, those who wish may direct memorial contributions to Trinity Lutheran Church 220 S. 2nd St. Springfield, IL 62701 or Lutheran Island Camp 45011, 230th St. Henning MN 56511. Please visit the online “Life Remembered Story” at www.bischfuneralhomewest.com where tributes and condolences may be left for the family.

In Memory Of Helen W. Hoffman