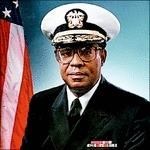 RADM William E. Powell, Jr. (Age 82) Rear Admiral William E. Powell, Jr. passed away on Sunday, February 3, 2019. RADM Powell graduated from the U.S. Naval Academy in 1959 and served the Navy with distinction for 30 years, retiring in 1988. Born in Indianapolis on April 12, 1936, he was one of 13 African-American students selected to integrate the prestigious Shortridge High School in his hometown. After graduation, he enlisted in the Navy, completed basic training at Bainbridge MD, entered the Naval Academy Preparatory School, and was appointed to the United States Naval Academy. He graduated from the Academy with the Class of 1959 and received his commission. RADM Powell's first assignment was to the Navy Supply Corps School in Athens GA. Early assignments with the Supply Corps included service at Pearl Harbor; the Naval Air Station at Point Mugu CA; the Naval Supply Depot at Subic Bay, Philippines; and Naval Systems Command in Washington, D.C. RADM Powell earned an MBA degree in Financial Management from George Washington University in 1969. Subsequent assignments included service aboard the aircraft carrier USS Intrepid; the Aviation Supply Office in Philadelphia; attendance at the Industrial College of the Armed Forces; the Navy Supply Center in Oakland CA; and the Office of the Chief of Naval Operations in Washington. From 1982 to 1984, RADM Powell served as Commanding Officer at the Naval Supply Depot, Subic Bay. After a brief stop back in Washington, he assumed command of the Naval Supply Center, Norfolk VA. In 1985, Powell was selected for the rank of Rear Admiral, becoming the first African-American flag officer in the Navy Supply Corps and only the eighth African-American flag officer overall in the U.S. Navy. After retiring from active duty with the Navy, RADM Powell accepted a position at DuPont in Wilmington DE, and subsequently worked for PECO Energy Company in Philadelphia. RADM Powell is survived by his wife of 60 years, the former Loretta Braxton Mitchell; sons William C. Powell and David A. Powell; grandsons Cameron Mitchell Powell and Lawson Maxwell Powell; niece LCDR Cecile R. Powell, USN Ret.; and the Scott-Lawson families. Burial will take place at the U.S. Naval Academy, details to be announced. Memorial donations may be made to the Navy Supply Corps Foundation, online at www.usnscf.com.
See more See Less