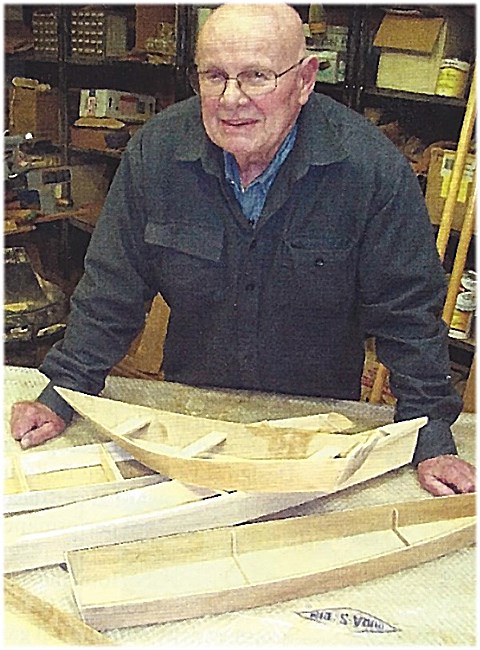 Irving Theodore “Pete” Winkler, Jr. Passed away on July 4, 2021 He was born in Detroit, Michigan to Irving Winkler Sr. and Freda Mitchell Winkler on January 10, 1928. His early years were spent in various states and places including Louisiana, Virginia, and California, before his family landed in Grosse Pointe for the rest of his growing up years. He married his high school sweetheart, Lois Ann Neumeyer in 1949, and they were married for 56 years before her death in 2005. They started out in St. Clair Shores in a house they built themselves, until they moved back to Grosse Pointe to raise their family. Pete started as a finish carpenter, and eventually owned his own successful industrial building company, including building his own subdivision of light industrial buildings. He retired at 55 and was able to pursue the things he loved best, which included biking, boating, traveling and building boats (many of which he has donated to organizations). He became a Christian as an adult, and loved his time on some mission trips and helping at Vacation Bible School. Although he was self-educated, he had a great love of learning and encouraged education including quietly paying for college for several needy people. He had a great zest for life, and his humble beginnings made him extremely generous to those he cared about. He was predeceased by his beloved wife Lois, dear son in law Steven Tucker, dear cousin Mary Printz, his parents, Irving and Freda Winkler, Sr, brother Richard, and sisters Janice Graham and Jean Allor. He leaves behind his beloved daughters Sharon (Anthony Moren), Constance (the late Steven) Tucker and Nancy (Albert) Spalding, grandchildren Peter (Annette) Brown, Richard (Ju hyung Kim) Spalding, Pamela (Craig Pratt) Moren, Patrick (Megan) Brown, Philip Moren, Lea Ann (Michael) Martinico and Abigail (Brian) Burkum, also 12 great grandchildren, nieces and nephews and dear friend Sharon Packus. The family will be receiving friends beginning at 9am with a 10am Memorial Service on Saturday, July 17 at the Grosse Pointe Yacht Club, 788 Lake Shore Rd., Grosse Pointe Shores, MI. 48236 In lieu of flowers the family requests donations to a ministry to rural teens that was close to his heart, Crossroads Farm, 5520 W. Card Road, Reading, Michigan 49274, at www.crossroadsfarm.org Arrangements are being handled by Kaul Funeral Home, St Clair Shores, MI.
See more See Less

In Memory Of Pete Winkler