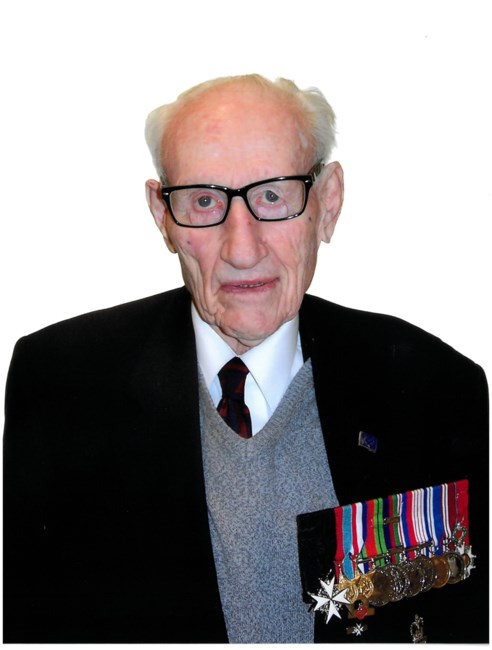 Hon Fellow of the Royal Heraldry Society of Canada, Hon. Lt. Col of the re-raised 78th Fraser Highlanders, Heritage Activist, realtor and a Second World War veteran who took part in the 1944 D-Day invasion of Europe, died in St. Lambert on August 28th, 2019. He was 98 years old. Son of the late Douglas Stuart and Lilias Terrill and brother of the late Campbell Stuart. A proud descendant of United Empire Loyalists, Gordon Bruce Okill Stuart was born in Montreal March 10, 1921. Through the generosity of his uncle, Sir Campbell Stuart, the first Canadian to be appointed to the post in the British Diplomatic Service, Okill was educated at Bishop’s College School , (Quebec) and at Gordonstoun School , Scotland, where H.R.H. Prince Philip was a classmate. As a result of the school ties ,Philip accepted an invitation to be a guest at a convention of the United Empire Loyalists in Lennoxville. Mr. Stuart enlisted with the 14th Canadian Field Regiment (RCA) in 1940, served as Bombardier, and was awarded the France-Germany Star, the Defence Medal, the War Medal and the Canadian Volunteer Service Medal and the Legion of Honour France’s Highest Order . He was founding president of a real estate firm, Okill Stuart Inc. and active in numerous public South Shore Montreal community groups and public service organizations including the Federation of Social Agencies, South Shore Community Services and the St. Lambert curling club. He was twice honoured by St. Lambert as its citizen of the year. He was an officer of the Venerable Order of St. John of Jerusalem, Knight of the Military and Hospitaller order of St. Lazarus of Jerusalem and was the recipient of the Ministry of Veterans Affairs Award and the Governor General’s Caring Canadian Award. He leaves his wife, Sylvia Fairlie and his two children from his marriage to Ruth Ann Clarke, who predeceased him in 1973, Colin ( Vicki Hinchcliff) of Pigeon Hill and Heather Stuart of Winnipeg. Visitation on Thursday September 5, 2019 from 2 pm to 5 pm and 7 pm to 9 pm at Collins Clarke Macgillivray White Funeral Home, Dignity Memorial, 307 Riverside Drive, Saint-Lambert, QC, J4P 1A7, The funeral will be held at the Saint-Lambert United Church, 85 Boul. Desaulniers, Saint-Lambert on Friday September 6, 2019 at 11 am. Donations in his memory may be made to a charity of your choice.
See more See Less

In Memory Of G.B. Okill Stuart