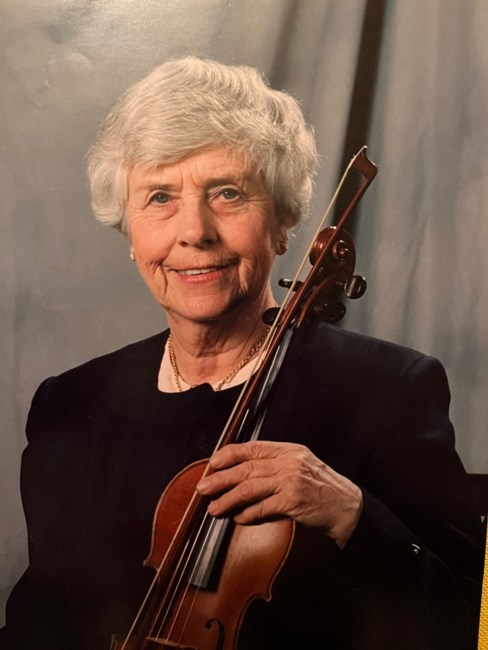 Was born on January 1, 1924 in Copenhagen, Denmark. She is predeceased by her husband Jorgen of Ronde, Denmark and one grandchild, Angela. Ketty is survived by her sister Hanne (husband Henning) of Roskilde, Denmark and by five children, Kirsten, Remo, Eric, Glenn and Andrew, 15 grandchildren; Tina, Tammy, Jens, Anne, Paul, Sara, Leonard, Emmanuel, Isaac, Jacob, Elsa, Adam, Eliana, Joshua and Eva and 8 great grandchildren, Mya, Josie, Leisel, Lailah, Adaline, Malia, Samson and Miles. She grew up in the Enghave Plads area of Copenhagen and as the only child of Karla and Svend Andersen, she was given opportunities for a musical education (mandolin and violin) which is a passion she held throughout her years, culminating with teaching music for 20 years. Her many students and their parents kept in touch with her long after the teaching years concluded. As a teenager, she also excelled as an elite competitive swimmer; a member of the Danish National Women’s Swim Team (‘Svoempiger’) in the late 1930’s. Any Olympic dreams were dashed by the outbreak of World War Two. During the War Years, in 1944, she met Jorgen Madsen, a young watchmaker and they married on March 22, 1947 in Copenhagen. In 1948 they sailed on the SS Batory to New York City; subsequently coming up to Canada where their children were born between 1950 – 1966. They made Longueuil their home in May 1950; living there for the rest of their lives. They loved their home and property; attending to it with exquisite detail, giving their children a wonderful environment to grow and flourish. A celebration of Ketty’s life will be held on Tuesday, January 17 at 11:00 AM Eastern Standard Time at St. Ansgar’s Lutheran Church (4020 Grand Blvd., Montreal). Those unable to attend in person are invited to join in the funeral service via Facebook at www.GSLCNY@facebook.com. A light lunch follows in the congregation’s Beck Hall. -- Pr Remo A. Madsen
See more See Less