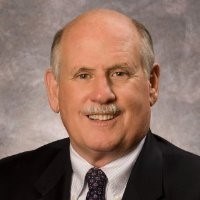 Arthur Lister “Butch” “Bopboop” Scharff died peacefully after having a stroke the morning of July 26, 2022. He was driving his car at the time and pulled into a fire station with weakness in his right arm that moved across to his left. By the time the ambulance got him to Missouri Baptist Hospital in St. Louis, he was unresponsive. His beloved wife Susie was with him, and his daughter Amy arrived shortly thereafter and held Arthur’s hand, talked, and sang to him until his heart issued its last beat. After 80 years of devouring life whole, he seemed to wipe the corners of his mouth, place his napkin down, and push himself easily away from the table. Arthur never met a stranger: all people were interesting to him, new worlds to explore, new senses of humor to engage, new hearts to open. He also never turned away a challenge, and could sell any idea in which he believed to nearly anyone. At 80, Arthur was still running the company he founded as a second career, Presidents Council, which enriches executives’ leadership skills and wisdom in monthly peer discussions of incredible depth. Prior to that, he ran Smith Scharff (nee Paper Company), a wholesale distribution business that his father had started in the 1930s. But he was a salesman and teacher at heart, educating people for the purposes of both sales – which ultimately, as he saw it, is helping people – and wisdom for wisdom’s sake. He passionately enlightened people not only for his companies but also for many charities and great causes. Sharing his passion, Arthur made a huge impact on his community and the world. Arthur was an inclusive, welcoming, jovial man who loved to connect people, especially if they could help each other. He had a boisterous and, some would say, ridiculous sense of humor; and he could brighten a room with his generous hugs and smiles. When Arthur was six years old, he wondered why people couldn’t carry themselves. So he tried it, looping his arms around the backs of his knees, grasping his hands together, and attempting to lift himself off the ground. His family encourages you to try this, and think of him as you laugh. Give it a good go. But forever unsuccessful at carrying himself, Arthur made a point to carry others throughout his life. Always generous of spirit and dedicated to helping people, he volunteered in his 20s as an advisor of his temple youth group (yes, he did play guitar and actually sang Kumbaya); in his 30s as a foster parent (also with his first wife and mother of his two biological children); in his 40s and 50s as an extra parent to most of his daughter’s friends, and as a champion of his favorite playground, Forest Park; and in his 60s and 70s as an executive board member for Logos School. Arthur raised millions of dollars for these and other non-profits, and was often their designated “sh!t disturber” that set things straight and made groups function better. He did have slight addictions to Wheaton terriers and hamburgers, but being a dedicated walker-for-exercise helped manage these. Arthur was a great-grandson of one of the founders of Jewish Hospital and the second rabbi at Temple Shaare Emeth; grandson of a national bridge champion and a well loved physician known for a similarly inviting sense of humor; and son of Helen Tuholske and Arthur A. Scharff, both of whom made their mark on the St. Louis community as well. He is survived by his wife Susie (Brooks) Scharff, his sister Nancy (Scharff) Rosenstock, his son Tom Scharff, his daughter Amy Scharff, and his beloved grandson, Sander, as well as two very confused dogs. The service is at Congregation Shaare Emeth on Wednesday August 3, 2022 at 10:30 am Central time (masks strongly recommended); Interment at Beth Hamedrosh Hagodol cemetery following. There will be two evenings of shiva, Wednesday and Thursday August 3 and 4, from 3:30-6:30 PM at the residence of Susie Scharff. If you attend in person or by livestream, please consider wearing a fleece vest or sweater vest in Arthur’s memory. He would think it’s hysterical, and we will laugh together in his honor. Please see below for Live Stream details. Tributes may be made to Nine PBS, Logos School, or a charity of your choice. Please send photos and videos of Arthur to acffhmorst@gmail.com for a slide show at the shiva and great memories for the family.
See more See Less

In Memory Of Arthur Lister Scharff