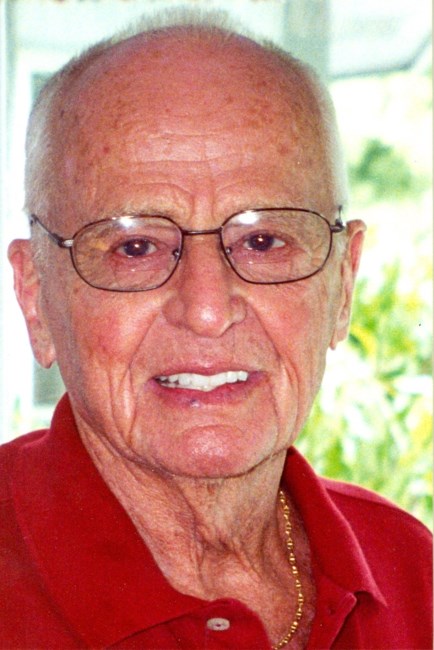 Robert Joseph Lipsitz, 98. He passed away on September 29th at his Chesterfield home surrounded by family. He was born in St. Louis. MO on August 1, 1918 in the house that his parents built on Waterman Ave. near Forest Park. His father was Dr. Samuel Lipsitz and his mother, Babette Kahn Lipsitz. His grandparents were Polish and German Jews. He had two brothers, Abe (Marion) Lipsitz and Dr. Ellis (Edith) Lipsitz. He attended Soldan High School and went to Cadet School at Yale University. He spent his summers growing up at a Camp Modin in Maine with his brothers, where he made lasting friendships. His mother would drive the boys to Maine, then take a boat to Europe and Palestine to visit relatives. In 1930, when Robert was 12, his mother and the boys flew to London and Paris. Commercial aviation had just started two years earlier in 1928. At an early age Robert and his brother Abe became interested in photography. He worked at the camera department at Stix Baer & Fuller while his brother repaired cameras to help pay his way through college. The two of them started selling photographic dark room supplies which they kept in their mother's house. They called the company AREL which were the initials of the three brothers plus their last name. At 16 he got his pilot's license and was one of the early pilots when aviation was in its infancy. He continued to fly until he was 82. Flying was his passion. He loved the freedom of being in the open sky, to go anywhere, anytime, which he would say was only possible in this great country. He was drafted during WWII and chose the Air Force. He was rejected as a fighter pilot because of his color blindness. Instead he was sent to England and ran the photographic division of the 8th Air Force Combat Camera Unit. Captain Lipsitz received the Bronze Star for his handling, developing, editing, dispatching, and releasing of all motion picture combat films of that unit. Robert and his team would jump aboard the bombers headed to Germany with hand-held movie cameras to film their missions. The bombing of Berlin, Dresden, D-Day and dozens more. The films were used to show the results of the missions; they were syndicated to raise money for war bonds, and to encourage the US Government to put more effort into the air campaign which lead to the Allies dominating the skies over Germany. His unit followed the troops and filmed the liberation of France and the continent after D Day. They also filmed the atrocities of the concentration camps, which showed the world the Holocaust. After the surrender he filmed Winston Churchill's VE-Day speech at 10 Downing Street and was the only American present at that historic event. Upon returning to St. Louis, he rejoined his brother in their camera business, and over the next decade they built it into one of the largest photographic distributors in the world. In 1952 to broaden their sales, they started Kalimar to import products from the Far East. During his first visit to Japan he developed a 35mm reflex camera that retailed for under $99.00, which in its first year outsold both Canon and Minolta. By 1960, Kalimar was responsible for importing 22% of all the Japanese photographic equipment into the US. His cameras were used by NASA on the 1965 Gemini 5 space flight. They were also the first company to merchandise a product on a package that could be hung on a peg hook. Today this is known as Blister Pack packaging. Later Kalimar expanded into electronics and even jade jewelry. In 1993, they became a licensee of Mattel to manufacture and sell world-wide a line of Barbie Doll cameras. He ran Kalimar until its sale to the Tiffen Corp in 1999. During his career, he missed only one day of work due to a bad back. He married Janice Hoffman of Santa Monica California in 1947. Their surviving children are William (Malú) Lipsitz, Nancy Stein, Larry (Lynne) Lipsitz, and Lisa (Bob) Fulsom. The oldest daughter Joan Fried, passed away 13 years ago, devastating the family. Other survivors include 10 adoring grandchildren and four great grandchildren. The family wishes to thank Donna Thum, a dear family friend, for her kindness and all the caregivers for their professional service. Robert was truly of the greatest generation. He was a man with complete determination who met every problem as a challenge to overcome. He never complained, always had a positive attitude , even in his final years when his eyesight began to fail. He loved his family and life to the fullest and was an inspiration to so many. He will be forever in our hearts and will be greatly missed. Funeral service Friday, September 30th 2:00 PM at BERGER MEMORIAL CHAPEL, 9430 Olive Blvd. No visitation prior to service, Private family interment. Memorial contributions preferred to the Joan Lipsitz Fried Memorial Fund, Congregation B'nai Amoona, 324 S. Mason Road, 63141 or KME, c/o Rabbi Max Weiman, P.O. Box 32088, St. Louis, MO, 63132. Visit bergermemorialchapel.com for more information.
See more See Less

In Memory Of Robert Joseph Lipsitz

Interment is Private, No Visitation Prior to the Funeral Service