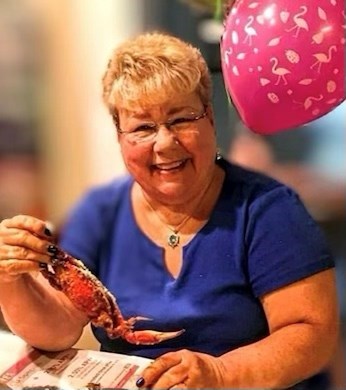 Joyce Robey Bennett, age 77, passed away peacefully on Sunday, July 24th ,2022 at Bridge point Hospital in Washington, DC with her daughters and son in law at her side. Joyce, or "Joyce Ann" as she was frequently called in her earlier years, was born on June 25th, 1945, in Washington, DC. She was the first born to James and Pauline Robey. Anyone who truly knew Joyce, knew her love for shoes. She would proudly tell the story of how her mother had worked in a shoe store and she was named after "Joyce Shoes". Definitely a fitting name! Joyce was also proud to say that she grew up in Maryland, so she was naturally a lover of Maryland crabs and told fond stories of going to Ocean City with her family. Joyce attended and graduated from St. Cecilia's Catholic Academy for girls in 1963, located in Washington, DC. Soon after graduation, Joyce landed a job with the Washington Gas Company. It was here that she met her former husband, Ralph Bennett. Joyce and Ralph were married in 1965 and began their married life together in Alexandria, Virginia. Joyce became a full time mother in 1970 when she gave birth to her first born daughter, Shannon and then became a mother for the second time, giving birth to her daughter Kelly, in 1973. By 1978, Joyce and her small family moved to very rural Stafford, Virginia. This would be where Joyce spent her remaining years. Joyce worked for a number of years at various jobs which would include being a preschool teacher and at various dental offices. In 1982, Joyce found a "forever home" in the office of Dr. Charles Sours. She began as the front desk receptionist and later became the office manager. She worked with Dr. Sours over a span of 40 years. Here she would meet so many wonderful people. People who became close friends and her "office family". Joyce will always be remembered for her strong love of her Grandchildren, her love of animals, shopping and the beach. She was also known to give the perfect gift. Anyone fortunate enough to be on the receiving end knows this to be true. Joyce was preceded in death by her parents, James and Pauline Robey. She leaves behind her two daughters, Shannon Allen and Kelly Upton; her son in law, Jonathan Upton; her 3 Grandchildren, Brittany Allen, Kyle Upton and Keaton Upton; her brother, Gary Robey and his wife, Betty; and her sister, Deborah Borth and her husband, Bert. She will also be greatly missed by some of her very special friends, Joy Baggett, Karen Winkler and Carol and Jim Hamilton; and in addition, a nephews, nieces, and cousins along with many friends that she felt were family. She truly loved and was loved by so many.
See more See Less

In Memory Of Joyce Bennett