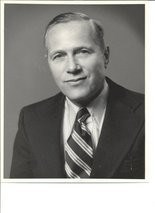 Former Staten Islander Bernard Lewis Moses, 88, who rose from the position of assistant manager at the Todt Hill Houses to director of management for the New York City Housing Authority, died Friday in NYU Downtown Hospital, Manhattan. Born and raised in Lorrach, Germany, he fled the country with his parents in 1938 after his father was threatened with arrest by the Nazis. The family settled in Bay Ridge, Brooklyn, and Mr. Moses graduated from Brooklyn Technical High School. He served in the U.S. Army's 82nd Airborne Division during World War II. During his military service, he converted to Catholicism and was a devout practitioner and student of the faith for the rest of his life. He and Anne T. Muscato were married in 1951 and moved to the Flatlands section of Brooklyn. In 1985, the family moved to Grasmere, and lived there until 2011, when they settled in Battery Park City in Lower Manhattan. Mr. Moses earned a bachelor's degree from Long Island University and received his master's degree in history from Columbia University man He decided upon a career in public housing and his first assignment was at the Todt Hill Houses in Castleton Corners. He then served as manager of many NYCHA housing projects, including Bushwick, Gowanus and Van Dyke Houses in Brooklyn. His expert handling of difficult situations and his commitment to tenants led to his promotion as director of management at the Housing Authority's central office. Mr. Moses is credited with creating the concept of tenant councils and patrols. He also served as director of research and director of modernization, helping to update the city's vast complex of housing projects. He retired in 1988. While living on the Island, he was active in the Staten Island Y Walking Club. Mr. Moses enjoyed photography and travel, as well as reading about history, religion and current affairs. Surviving, along with Anne, his wife of 61 years, are his sons, Paul, James, David and Andrew, and seven grandchildren. The funeral will be Tuesday from the Casey Funeral Home, Castleton Corners, with a mass at 10 a.m. in St. Sylvester's R.C. Church, Concord. Burial will follow in Moravian Cemetery, New Dorp.
See more See Less

In Memory Of Bernard L. Moses