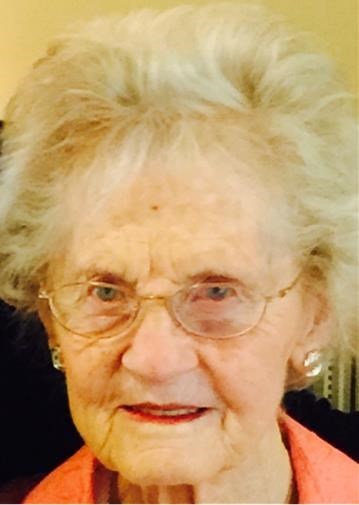 Ann Frances (Clatterbaugh) Sheets Polachek, 87, a longtime resident of Staunton, passed into the arms of Jesus, her Lord and Saviour on Sunday, August 7, 2016 at Hershey Medical Center, Hershey, PA. She had recently moved to be close to her daughter and resided in Country Meadows Assisted Living, Hershey, PA. Ann was born on December 21, 1928 in Mt Solon, a daughter of the late Robert Preston and Mary Clay (Siple) Clatterbaugh. She was a graduate of North River High School, class of 1946, and was married to Charles Sheets on July 18, 1947. She lost the love of her life at the age of 39, when Charles died of a sudden heart attack; leaving her with two teenage daughters to raise. She then married John Polachek of Charleroi, PA. In 1974 and was widowed again 13 years later. Ann was a devoted mother and wife, an immaculate housekeeper and wonderful southern cook. She worked as a sales clerk in the fabric department at Leggetts Department Store. Ann was a long time member of Calvary Baptist Church and had at one time been a member of the church choir, the Ladies Sunday School Class and served on committees preparing cooked meals or lending a helping hand to those going through trials of their own. Later in life she enjoyed spending winters in Ft. Myers with her husband, John, until his death in 1987. Until her recent move to Hershey, PA., she resided over 3 years at Baldwin Park Independent Living. In addition to her parents, she was preceded in death by her husbands, Charles William Sheets and John Edward Polachek; a daughter, Deborah (Sheets) Nastelli at the age of 45 after courageously fighting breast and brain cancer; her brother, Paul Clatterbaugh; and sisters, Virginia VanLear, Dorothy Craun and Charlotte Fitzgerald. Survivors include her daughter, Patricia (Sheets) Yacisin and husband, Gary of Harrisburg, PA; grandchildren, Brad Yacisin of Palmyra, PA and Laura Seneca of Virginia Beach; great grandchildren, Hunter Seneca and Jackson Yacisin; and a step- great granddaughter, Gabby Seneca; a sister, Mary Wilson (Clatterbaugh) Spitler of Staunton. A funeral service will be conducted at 11:00 a.m. on Saturday, August 13, 2016 at Calvary Baptist Church, 105 Garland Dr., Staunton, VA 24401 with Pastor Bobby Campbell officiating. Visitation will be from 10-11 at the church. There will be a catered luncheon at the church immediately following the service. Burial will follow at Augusta Memorial Park. Memorial contributions in Ann's name may be donated to Compassionate Care Hospice, 1513 Cedar Cliff Drive, Suite 100, Camp Hill, PA. 17011. The family of Ann wishes to extend our sincere thanks to all the nurses and doctors on the 6th floor at Hershey Medical Center and to Compassionate Care Hospice who provided care, comfort and compassion in her last days. Arrangements have been entrusted to the Staunton Chapel of Reynolds Hamrick Funeral Homes. Relatives and friends may share condolences and memories with the family online by visiting www.reynoldshamrickfuneralhomes.com.

In Memory Of Ann Sheets Polachek