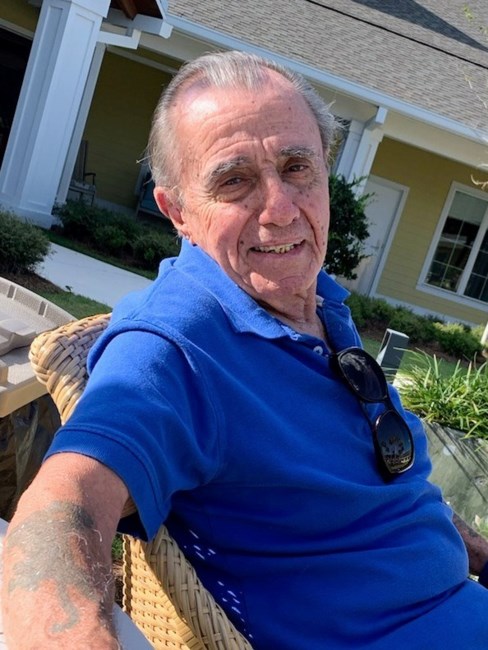 PALM CITY: Richard "Dick" DeVito Sr., 88, of Palm City, passed away on Sunday, January 22, 2023, in Stuart. He was born on July 17, 1934, in the Bronx, NY, the son of the late Dominick and Josephine (Mariano) DeVito. Dick was an ex-professional boxer from NY who began boxing at the age of 12 with the Police Athletic League. He reached the semi-finals of the New York Golden Gloves Tournament at age 15 under an alias. At 16, he reached the finals. He joined the Navy at 18 and served during the Korean War. During that time, he became the Sixth Fleet Lightweight Champion and also reached the finals of the Boston Golden Gloves in Lowell, MA. He turned professional in 1956, at the age of 21. He was undefeated and scheduled to fight Jay Fulmer in the preview bout on the Sugar Ray Robinson/Gene Fulmer card at Yankee Stadium, but a motorcycle accident ended his professional aspirations. At 26, he met the love of his life, Eva. They were inseparable from the start and were married shortly after. They had three beautiful children, Richard Jr., Joanne and Diane. After a career as a New York City Police Officer in the Bronx, during which he tutored fellow officers in self-defense, he taught boxing for 15 years in New York at both the YMCA and his own West Nyack Boxing Club. He also established a Police Athletic League boxing gym in Piermont,NY, and worked as a consultant for the Port St. Lucie Police Athletic League boxing club. He retired from the New York City Police Department in 1972, and moved to Palm City, FL, with his wife, Eva, and their 3 children, where he spent his days scuba diving, boating, motorcycle riding and bike riding. A lover of Harley Davidson, he rode his motorcycle until he was 82 and his icycle until he was 86 and was often seen riding all over Martin County to visit family and friends. He and his hilarious one-liners will be sincerely missed, but it gives his children greta comfort to know that he is with their Mother again and his parents and sister that he loved and missed for many years. Dick was married to his late wife, Eva, for 58 years prior to her passing in December, 2019, and is survived by his 3 children, Richard DeVito Jr. of Stuart, FL and daughters, Joanne DeVito Negrut and her husband, Bo, of Palm City and Diane DeVito Ardizzone and her husband, Marc, of Land O Lakes; grandchildren, Richard DeVito III, Dominick DeVito, Logan Negrut, Nina Negrut, Trevor Ardizzone, Reeve Ardizzone and Nolan Ardizzone; several nieces, nephews and cousins. In lieu of flowers please donate to the Humane Society of the Treasure Coast, 4100 SW Leighton Farm Ave, Palm City, FL 34990.
See more See Less

In Memory Of Richard DeVito Sr.