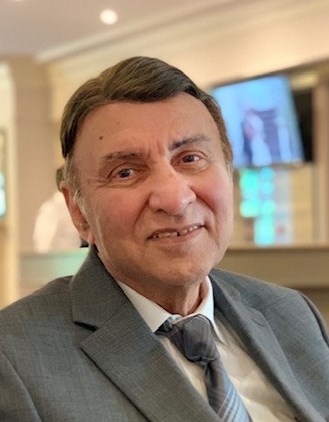 Dr. Firoze Bamanshaw Jungalwala, 85, of Sudbury, Massachusetts passed away peacefully on September 16, 2021, surrounded by family in Boston, Massachusetts. He is survived by his wife Cynthia Ebert and stepson Matthew Ebert, his daughter Ferzin Patel, son-in-law Rajan Patel and grandson Davin Patel, and son Jehangir Jungalwala, daughter-in-law Julie Jungalwala and grandson Theodore David Jungalwala. Firoze was born on August 28, 1936 in Surat, India born the oldest of three sons to Bamanshaw and Tehmina B. Jungalwala. Firoze married his first wife, Khorshed Jungalwala in 1968 (predeceased in 2007). In 2018, Firoze married Cynthia Ebert, of Harvard, Massachusetts. Firoze earned his B.S. and M.S. degrees in Organic Chemistry and Physics. He went on to earn a Ph.D. in Biochemistry from the Indian Institute of Science, in Bangalore, India before completing his post-doctorate studies in Neurochemistry at the University of Wisconsin (Madison), Washington University Medical School and Cambridge University, England. Firoze moved back to the United States with his first wife and two children after President Kennedy created 12 special institutions for Neuroscience research, one of them being at the Eunice Kennedy Shriver Center in Waltham, MA. While at the Shriver Center, Firoze chaired the Department of Biomedical science. After his tenure at the Shriver Center, Firoze served as a Biochemist in the Neurology department at Mass General and later as an associate professor of Neuroscience at Harvard Medical School. His last professional post was as a professor of Biochemistry and Molecular Pharmacology at the University of Massachusetts Medical School in Shrewsbury, until retiring in 2006. During his professional career, Firoze served as an editor of several neuroscience journals, published over 150 papers in prestigious trade journals, and received several grants from the National Institute of Health (NIH) to perform research for the NIH and private institutions. He was also commissioned under three different presidential administrations to review grant proposals in the field of neuroscience. Firoze was a devout Zoroastrian and a founding member of the Zoroastrian Association of the Greater Boston Area (ZAGBA) in 1983, also serving as its first President. Firoze was a loving husband, father, and grandfather who prided himself on helping others. He enjoyed spending time with family and friends, as well as vacationing on Cape Cod and in the Caribbean alike. Firoze loved classical music, opera, tennis, and always telling a good joke. Although Firoze had a robust professional career and social life, he will be most remembered for his humility and kindness. Firoze lived an abundant life, always espousing the three tenets of Zoroastrianism: Good Thoughts, Good Words, and Good Deeds. Funeral services will be held on Saturday, September 25, 2021, promptly at 10 am at the Newton Cemetery and Arboretum Chapel in Newton Massachusetts, with witness of cremation directly following in the Newton Crematory. Space is limited to 100 attendees. Masks are mandated indoors as per the City of Newton. Full COVID-19 vaccination is required to attend services in person. We have provided a ZOOM link below for anyone who is unable to attend in-person. The family requests that attendees bring a head covering (handkerchief or scarf) during religious services. A luncheon reception will immediately follow the cremation. In lieu of sending flowers, the family kindly requests donations to ZAGBA, c/o Pria Sarma, 103 Randlett Park, Newton, MA 02465 (https://paypal.me/ZAGBA?locale.x=en_US) or the St. Benedict Abbey, 252 Still River Road, Still River, MA 01467. https://www.abbey.org/mission-advancement/donate/donate-online/). https://us02web.zoom.us/j/8245887064
See more See Less

In Memory Of Firoze Jungalwala