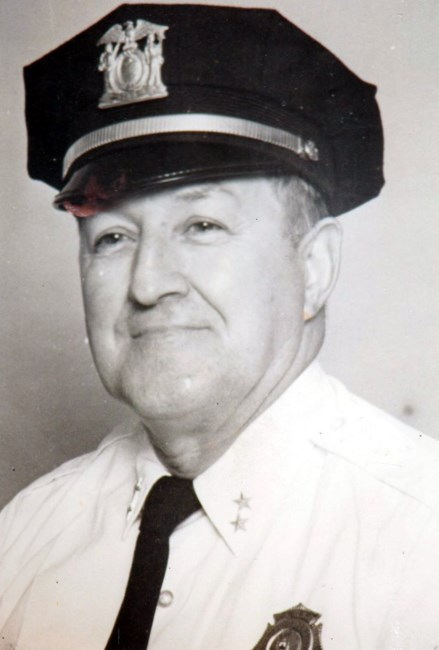 Adam J. Krainak, longtime resident of Spring Valley, New York, passed away in Goshen, NY on Sunday, January 13, 2019 at the age of 97. He was born on July 31, 1921. Adam is survived by his three married daughters, Kathleen Brooks (Jeffrey), Eileen DeToma (Frank) and Eloise Krainak-Daher (Dave) and his two grandchildren, Athena and Adam Daher. Adam was a proud Army Veteran of WWII, serving in the South Pacific and later joined the Spring Valley, NY Police Department, for 34 yrs. where he climbed the ranks from motorcycle cop to Chief of Police. Adam was also a dedicated volunteer firefighter and Honorary Chief of the Rockland Hook & Ladder Company in SV receiving its first lifetime achievement award of 70 yrs. Adam was heavily involved with Rotary, receiving the Paul Harris Fellowship twice. He was a true gentleman, whose kindness, and generosity had touched many lives. He will be sorely missed. Visitation will be held on Wednesday, January 23, 2019 from 2-4pm & 7-9pm at Wanamaker & Carlough Funeral Home, 177 Route 59, Suffern, NY. A Mass of Christian Burial will be celebrated at 10:30am on Thursday, January 24th at St. Joseph’s Church in Spring Valley, NY with entombment to follow at Ascension Cemetery, Airmont, NY.
See more See Less

In Memory Of Adam J. Krainak