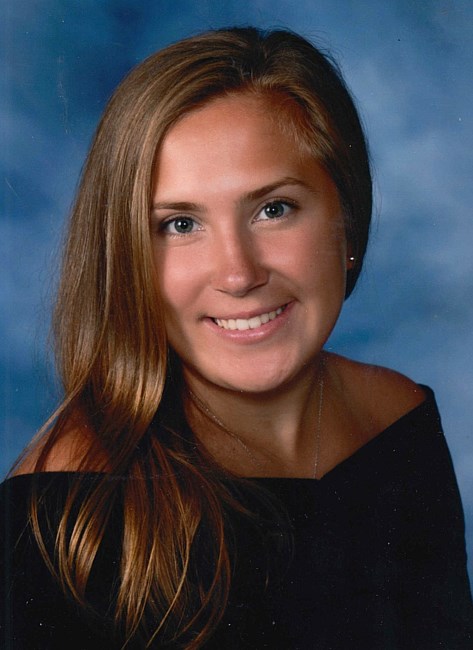 Madelyn Lee Nicpon, of Suffern, NY passed away Sunday, October 17, 2021. Madie was born December 22, 2000 to Christopher and Kathleen Verboys Nicpon. She was a talented athlete, scholar, daughter, sister, granddaughter, cousin, niece, friend, dancer, singer. Her community and activity involvement began at an early age. She started off with ballet at the YMCA under Ms Becky and loved her Saturday mornings there. Her performances on the stage of RCC theater brings so many fun memories alive. She then began Youth soccer with RVSC and became quick friends with girls that remain some of her closest friends through HS. In second grade, her uncle convinced her mother to become a SGYL coach and scheduler, thus allowing Madie to join the grade ¾ team. Madie was not deterred on the size differences on the field, and was quick to jump in and guard even the tallest opponent. Even during the busy days of soccer and lacrosse practices and games, Madie remained a ballet dancer, moving on to classes with Coupe in Nanuet. She loved performing in The Nutcracker and expanded her theater run with Helen Hayes Youth Theater, choir, and other theater groups. By 8th grade Madie realized she needed to make a choice between “sports” or “the arts” and chose sports. But even so, she could not let go of the arts, and picked up weekly voice lessons with her beautiful voice coach, Bette Glenn. The annual concerts she sang in were true gifts to her family. Madie was an exceptional student. Her competitive nature was revealed in Kindergarten when she participated in a New York State Spelling Bee. Even though “sour” will remain a “sore” subject, she still loved words, grammar and reading. There were usually 2-3 books on Madie’s night stand for “pleasure reading.” Oftentimes re-reading the same book or series twice because she loved the author. In elementary school Madie became involved in Youth Ministry at The Church of the Presentation. She was the “go to” girl for many roles in the skits that made up the Family Faith Formation meetings. In High School, she participated in two Mission trips to Jamaica where she helped orphans and children with disabilities. These experiences helped solidify her desire to continue a life of service to others, especially children. Her High School years were loaded with multiple Honors and AP classes. She consistently had greater than a 4.0 GPA and was a member of multiple Honor Societies. She was the Class of 2019 President and participated in numerous activities and clubs (usually requiring extra pages on applications to list them all!) Some of her favorites included DECA, the student liaison to the Suffern school board, secretary of the school's charity of the month program, and service as a lieutenant on the Ramapo Valley Youth Corps, assisting EMTs and paramedics during ambulance runs. True to her competitive roots, she played three high school sports. After becoming an all-Section 1 all-star in two of them, field hockey and lacrosse, Madie chose to pursue lacrosse in college. It was during her High School sophomore year that Madie suffered a lingual nerve injury during wisdom teeth removal. She was a nerve graft recipient under the skills of Dr. Ziccardi at Rutgers University Hospital. Her interaction with Dr. Ziccardi led him to recommend Madie for a PR promotion with AxoGen, the company who supplied Madie’s nerve graft. Madie made an immediate impression on the AxoGen family and was nominated and received the honor of participating in the 2019 Rose Bowl Parade as a rider on the Donate Life float. This event had a major impact on Madie and led her to become a registered Organ Donor and to encourage others to do the same. Madie was thrilled to be recruited to the Tufts Women’s Lacrosse team her Senior year. Affectionately known as Scooter, she whole-heartly became a Jumbo and embraced her teammates, coaches and school community. Even though COVID restricted personal interaction, Madie remained connected and nurtured many friendships. She was a proud member of The Ivy Sorority, she was a representative to the Student Athlete Advisory Committee, a Green Dot representative, and recently accepted into the Tufts Dance collective. After multiple changes of major, she settled on Biopsychology. Her plan was to attend Medical School and become a pediatrician, with her parents' hope of her working side by side with her father in his practice, where they could continue their shenanigans. Despite the tragic events that took place this past Saturday into Sunday, Madie was able to remain on life-support and to follow through on becoming an Organ Donor. Her beautiful eyes have given sight, her kidneys have altered the lives of two ladies, and her tissue, bone and nerves will help countless people; her lungs, although damaged, will aid research. As she was quoted in a newspaper article in 2019, “It is not just about saving lives, it is also about improving quality of life.” “Madie has and will continue to inspire us every day. We should all strive to live life a little more like Scooter did — a person that valued love, loyalty, compassion and friendship." Visitation will be held Friday, October 22, 2021 from 4-9pm at The Church of Presentation 271 W. Saddle River Rd., Upper Saddle River, N.J. In lieu of flowers, donations can be made to New England Donor Services www.neds.org. A Mass of Christian burial will be Saturday October 23, 2021 at 10am The Church of Presentation with the Internment to follow at Ascension Cemetery. Mass will be livestreamed https://www.churchofpresentation.org/funeral-ministry
See more See Less

In Memory Of Madelyn Lee Nicpon