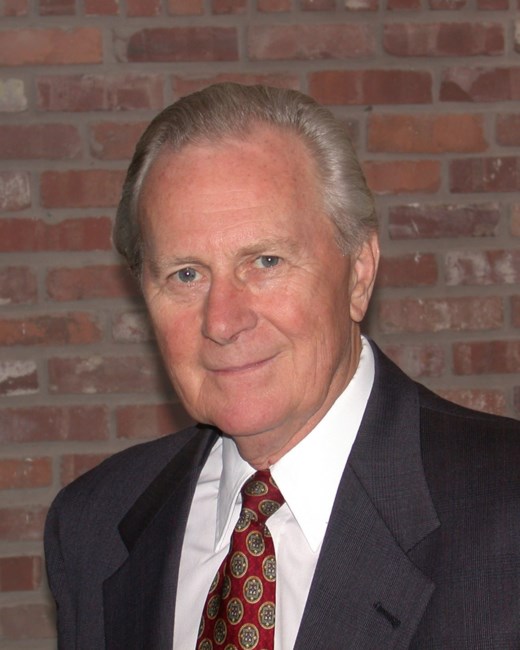 Donavon Lee Wallin, 87, of Sugar Land, Texas, passed away on Thursday, September 22, 2022, after a lengthy battle with Parkinson’s disease. Don was born at home on the family farm in Farragut, Iowa, on October 24, 1934 to the late Helen and Oscar Wallin, and was the youngest (by 15 years!) of their 5 children. Don grew up on the farm, and attended Shenandoah High School where he played on the Shenandoah Mustangs football team. Upon graduation, he received a football scholarship to Kansas State University, and got his first taste of the big world outside Shenandoah, Iowa. In 1954, at the age of 19, he was accepted as an aviation cadet in the United States Air Force, and began training to become a pilot. After completing his flight training in San Angelo, TX, he was commissioned as a 2nd Lieutenant, and continued his advanced pilot training in San Antonio, TX, at Randolph Air Force Base. After heading back to his Iowa hometown to convince his high school sweetheart Pat Raymond to marry him in 1955, the couple moved from Iowa to his first military assignment at Mather Air Force Base in Sacramento, California. From there, Don’s military service would have the family moving many times over his 22-year career as a pilot and officer. As Don described it at his 45-year high school reunion: “And adventures they were, from California to Colorado to Alaska to Texas to Illinois to Germany to Viet Nam to California again. We found time to have two great children, who quickly learned to pack their bags and make new friends. I also squeezed in a degree in Electrical Engineering from Colorado and graduate work in business from Southern Illinois University.” After retiring from the Air Force in 1977, Don launched his second career as operations manager, then executive with Stewart & Stevenson Services, Inc. in Houston, TX. As President of Stewart & Stevenson Operations, Inc., he led development of a new subsidiary company that expanded to operate electric power and oil and gas production facilities globally, with offices in Australia, Argentina, Colombia, China, and Nigeria, as well as California, New York, and Texas. Following his retirement in 1998 from his second career, Don began his own consulting business. While Don was passionate about his work and colleagues, he loved his life outside of work as well. He was an avid fisherman and boater who loved being on or near the water, especially with family and friends. He loved people – always reaching out to meet, greet, learn about, and help others. He loved animals and all his pets and grand-pets. He captained his boats and our family through fair weather and storms alike, always our rock, always approaching life with his sparkling wit, curiosity, optimism, kindness, and unconditional love. We are heartbroken to lose him, but so thankful for the long life and great love we shared with him. As he always said, “Bye-bye for now” … we will keep him close in our hearts until we meet again. Don is survived by his beloved wife of 67 Years Pat Wallin and pets Tuffi and Sugar, his daughters Kelly Wallin (Mary Beth) and Rissa Foerschner (Bob), his grand-children Jennifer Hayes (Levi) and Allison Foerschner (Ross), great-grandchildren Adileigh and Bowie Hayes, and a bevy of adoring nieces, nephew, and grand-nieces/nephews. The family would like to thank Don’s care team at CHI St. Luke’s Sugar Land and his primary care team – especially Dr. Mathews Ninan, Dr. Rasi Wickramasinghe, and Vaishali and Dorothy from Homewell Care Services – for their compassionate care, guidance, presence, and patience. In lieu of flowers, memorial contributions can be made in Don’s name to the Michael J. Fox Foundation for Parkinson’s Research or the Houston Humane Society. Fond memories and expressions of sympathy may be shared at www.settegastkopf.com for the Wallin family.
See more See Less