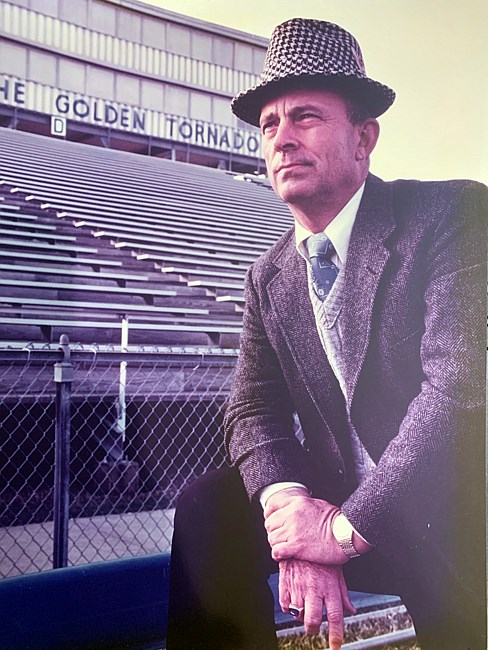 Coach Shannon Suarez of Sulphur, Louisiana died on July 25, 2020 in a local hospital as a result of COVID-19. He was born in Biloxi, Mississippi on January 19, 1934 to Joseph Ambrose Suarez and Ida Mae Ingram Suarez. As a child, he had a love of sports and in the 5th grade he knew he wanted to be a coach. He never wavered from this goal in life. In high school, he was an outstanding athlete who lettered in four sports. It was in high school that he first met his mentor, Coach Bear Bryant. They developed a friendship that would last until Bear’s death in 1983. After graduating from high school, he went to Perkins Junior College where he played football and baseball. From there he transferred to San Angelo State where he also played football. He really enjoyed his time at San Angelo State and made lifelong friends. After San Angelo State, Shannon joined the Marines and served for two years, earning the rank of Sargeant. Next he went to Southern Miss where he majored in Education and continued on with his Master’s. After college graduation, his first job was at Jefferson Military Academy in Natchez, Mississippi where he taught cadets. While teaching there, Hollywood came and filmed “The Horse Soldier” with John Wayne in the starring role. Coach’s cadets were in the movie and he met and befriended John Wayne, himself. His next job was at Ocean Springs High School where he coached junior high basketball and football. He was promoted to head high school football and basketball coach after two years, achieving winning records his two years at the helm. Coach earned the respect of the entire community and kept in touch with many of his players from Ocean Springs throughout his lifetime. When he was briefly hospitalized on June 11, 2020, he visited with one of his favorite players from that era, Frank Galle. From Ocean Springs, he moved on to Sulphur High School in 1963 as the offensive and defensive line coach. In ‘64 the Tors advanced to the state finals and in ‘65 the Tors won the state championship. His star pupil, Arthur Davis, was named the Louisiana Outstanding Lineman and went on to a stellar career at LSU. Subsequently, Coach was promoted to the head coaching position at Sulphur High in 1966, and was named Louisiana Coach of the Year. He patterned his coaching style and his practices throughout his career after Bear Bryant. Coach Suarez believed in discipline, hard work, taking care of the little things, and having a strong character. He was probably best known for being a master motivator. He was often asked what it took to have such a successful football program and he would say, “It takes a lot of things to have a successful program. You have to have a good coaching staff, but probably the two most important things are to keep politics out of your program and have a good principal.” Coach Suarez had the privilege of serving under one of the best principals in Mr. B.S. Walker. While at Sulphur, Coach compiled an impressive record of 144-46-4. His team made the State Finals in 1968 (where they lost to Woodlawn and the legendary Joe Ferguson). His teams made the state semifinals twice and state quarterfinals 5 other years. He led the Golden Tornadoes to ten District 3-4A Championships. Coach was named SWLA Coach of the Year three times and was proudly inducted into the Louisiana High School Sports Hall of Fame in 1996. He was respected and loved by former players and students whom he taught lifelong lessons. Many of his players benefitted from college football scholarships gained under his tutelage and had outstanding careers. He was a wealth of wisdom and had many sayings and one-liners that stick with people to this day. The two he may be most known for are, “You can’t fly with the buzzards at night and soar with the eagles during the day,” and, “You never see a bluebird sitting next to a buzzard.” He was a popular speaker at coaching clinics, including at the University of Alabama. He would impart his vast knowledge about the game to the younger coaches who carried it on throughout their careers. Many called his system “ahead of its time.” He kept up with his former players and was always so proud of their accomplishments. As coach and athletic director at SHS, he really enjoyed watching his athletes competing in other sports and representing their school. He is survived by his daughter Kristi Suarez Sanner and husband Charles, son Wayne Suarez and wife Penny, son Bryant “Bear” Suarez, son Shannon “Cubby” Suarez, his six grandchildren and his six great-grandchildren. He was preceded in death by his wife Eileen Suarez, his sister Inez Drieling, and his brother Joseph A. Suarez, Jr. The family would like to extend special thanks to Travis Stanford, who spent countless hours watching sports, especially football, movies, listening to gospel music and Elvis Presley during the last years of his life. He loved Travis like a son. They’d also like to extend thanks to Bertha Pappilon and his aide Paula Harmon. Funeral arrangements are entrusted to Hixson-Sulphur Memorial Funeral Home. Visitation will be held from 4-8 p.m. on Tuesday, July 28, 2020 at Henning Memorial United Methodist Church, 404 South Huntington St., Sulphur, LA and will resume on Wednesday from 12 p.m. until the time of service at 2 p.m. also at Henning Memorial United Methodist Church. Burial will be at Mimosa Pines Cemetery South in Carlyss. If you’d like to make a donation in his memory, Coach Suarez was an avid supporter of St. Jude Hospital in Memphis, TN. His two loves were the Sulphur Golden Tors and the Alabama Crimson Tide, and at 1:45 PM on July 25th, he got the best seat in the house. Go Tors and Roll Tide!
See more See Less

In Memory Of Shannon Suarez