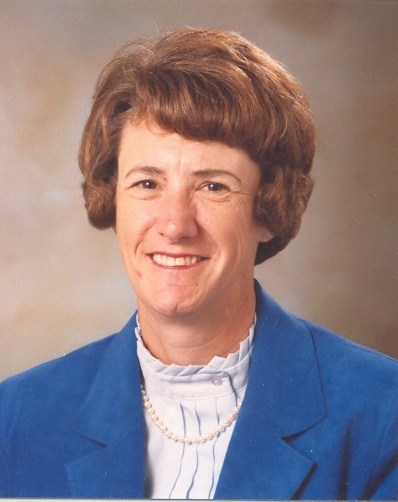 Keesling, Karen Ruth, a former Assistant Secretary of the Air Force, died July 4, 2012 in Sun City, Arizona. She was born July 9, 1946 in Wichita, Kansas. Karen was a graduate of Arizona State University, receiving a B.A. in math education in 1968 and an M.A. in 1970. While at ASU, she participated in a myriad of activities: she played French horn in the marching band and women's varsity golf, was elected Treasurer and then President of Associated Women Students, and was a member of Mortar Board. She also was a colonizing member of Pi Beta Phi sorority. Karen's public service career reflected her lifelong commitment to establishing equal rights for women. She first worked as Associate Dean of Women at the University of Kansas (1971-72). She then moved to Washington, D.C., where she served as executive secretary in the Department of HEW’s Advisory Commission on Rights and Responsibilities of Women (1972-75). During the Ford Administration, she was Director of the White House Office of Women (1975-77). After two years as a research analyst in the Civil Rights Division of the Library of Congress, she joined the staff of Sen. Nancy Kassebaum as a legislative aide while attending Georgetown University Law Center, receiving her law degree in 1981. Karen’s career with the Air Force during the Reagan Administration included appointments as Director of Equal Employment Opportunity (1981-82); Deputy Assistant Secretary for Manpower Resources and Military Personnel (1982-83); Principal Deputy Assistant Secretary for Manpower, Reserve Affairs and Installations (1983-87) and for Readiness Support (1987-88); and Assistant Secretary for Manpower and Reserve Affairs (1988-89). In 1990 Karen served as State President of the Virginia Federation of Business and Professional Women and was instrumental in establishing the Virginia Women’s Hall of Fame and the Virginia Women’s Historic Trail. Following her Air Force civilian service, Karen joined the United States Department of Labor as Acting Administrator of the Wage and Hour Division. She left government work and relocated to Arizona in 1996 to care for her parents, Ruth Sharp Keesling (died 1997) and Paul W. Keesling (died 2001); and for her aunt Evelyn Sharp (died 2007). A member of the Virginia, Arizona and Florida bar associations, she practiced law until her retirement in 2009. She continued her involvement with the P.E.O. Sisterhood and her church. While her professional passion was for equal rights – she watched from the gallery when the Senate approved the Equal Rights Amendment in 1972 – her avocation was golf. Karen learned the game when ten years old, and at 15 won the first of two Kansas Junior Girls Golf Tournaments. In high school, she was the first girl to earn a letter sweater, which required participation in all sports. She taught the golf class because the gym teacher did not play the game. Other golf achievements followed, including the Kansas Women’s Golf Championship (1966) and first place in the Congressional Ladies Tournament at the Andrews course (1985). Her trophies and certificates recorded several “holes in one.” Of the many awards she received, the two Karen prized most were the ASU Alumni Achievement Award in 1976, and selection as one of the Ten Outstanding Young Women of America in 1975. The foremost accomplishments for which she will be remembered, though, are her love and care for family, and her dedication and concern for friends. A Service of Remembrance and Celebration of Life for Karen R. Keesling will be conducted on Wednesday, August 29, 2012 at 1 p.m. at Faith Presbyterian Church, 16000 N. Del Webb Blvd., Sun City, Arizona 85351. In lieu of flowers, contributions may be made to the church.
See more See Less

In Memory Of Karen Ruth Keesling