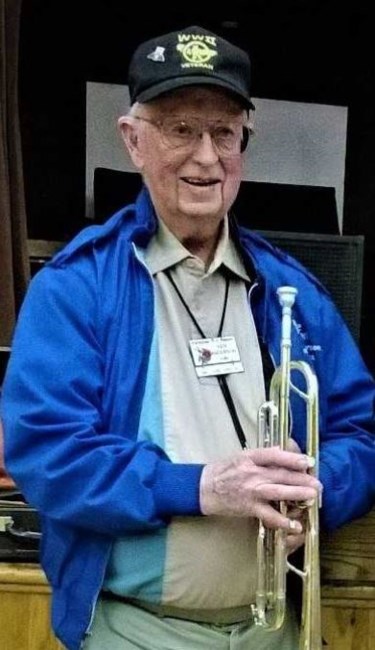 Kenneth Blair Anderson, a life-long resident of Newell, Iowa passed away on December 6, 2019 in Sun City, AZ at the age of 95. Ken was born at the family farm located west of Newell to Alexander and Eulalia (Blair) Anderson. He graduated from Sulphur Springs High School. After serving his country in the army during WW II, Ken graduated from Iowa State University with a degree in Agricultural Education in 1950. He returned to Newell to a family farm and was actively engaged in farming and teaching for many years. Ken loved raising Black Angus cattle, playing trumpet, teaching physics, living the RV lifestyle, snow-birding to Sun City, AZ, and traveling the world. He was active in the Newell Congregational Church, Masons, Eastern Star, American Legion, Iowa Farm Bureau, Newell School board, Lions, and serving on the draft board. Ken is survived by his wife of 71 years, Jane; 3 children: Keith Anderson, West Des Moines, IA; Larry Anderson (Rose), Perry, IA; and Carmen Burton, El Cajon, CA; 4 grandchildren: Stacy Anderson, Story City, IA; Rae Lynn (Mike) Skow, Hilliard, FL; Tyler (Meaghan) Anderson, Bondurant, IA; and Austin Burton, El Cajon, CA; 1 great-grandchild: Gabrielle Anderson, Bondurant, IA; and sisters: Margaret Bearse and Eleanor Wendlandt. He was preceded in death by his parents; his older brother, Joel Anderson; and infant son, Bruce. Memorial services will be held at 2:00 pm on February 1, 2020 at Paradise RV Resort. Burial services will be held in Newell, IA at a later date. Memorials may be sent to American Legion Post 193, 208 S. Fulton St., Newell, Iowa or Sun City Encores Dance Band, c/o John Withart, 10950 W. Union Hills Dr. #2564, Sun City, AZ 85373. The following are excerpts from an autobiography written 12 years ago that was found on Ken’s computer: “I will be 83 years old on Nov. 20, 2007. My spouse’s name is Jane and this is our 22nd year as a snowbird. I have a B.S. in Ag. Ed from Iowa State University and a M.S. in physics with minors in math and chemistry from The University of South Dakota. I had a 2 year hitch in the Army with rank of PFC. Major instrument is trumpet and also have a cornet and flugelhorn. Currently, I am a member of The Desert Brass, Pops, Sun City Concert, Encore, Prosit, and Shrine bands. My vocation was farming and teaching, done concurrently. Hobbies other than music are travel, tennis, and Honey-Do jobs. I was born on a farm close to a small town, Newell, in northwest Iowa. When in 5th grade I started playing trumpet. The band director, Albert Morse, was very influential in my early music career. He was very strict and demanded the best from you. Many was the time that his baton would come down with a WHACK on my hand or arm if I missed some notes or wasn’t concentrating. By the end of my senior year, in 1942, I had progressed to lead trumpet in 3 local community bands. Mr. Morse was a contemporary of Karl King as well as a friend. So we played much the same type of music. Brass Bands, overtures, and marches are still my favorite music. WW II was in progress and I enlisted in the Navy V 12 program. But D-Day came along and they canceled the program so I was drafted into the army. I was sent to Europe the 1st of Jan. 1945 as a replacement in a heavy weapons platoon in the 104th infantry regiment in the 26th YANKEE Division. I arrived at the front line during the latter part of the Battle of The Bulge. We spent the next 4 ½ months winding our way down through southern Germany, Austria and ended in Czechoslovakia. The Bronze Star is one medal I am proud of among others. At the end of the war, our Regimental Commander decided he needed a band formed to help the morale of the troops scattered around occupying the various villages. So a call came for any one that could play an instrument. We had a parade band, concert band and a dance band. We would practice each morning and travel to one of the outlying villages in the afternoon. We played a Retreat Parade for the Col. to inspect the troops, then the concert band would give an hours’ long concert (mostly for the civilians) and at night play a dance for the G. I’s. Back to our quarters by midnight and up again at 6:30. I spent the last 5 months of my tour in Vienna. What a place to be for all or anything musical. We spent a lot of time going to concerts, operas etc. I returned home in July of 1946. I enrolled at Iowa State University in Ag. Ed. I played in the marching band all 4 years and the concert band. I graduated from ISU in 1950. But in the meantime I met and married Jane Larson from Eagle Grove, IA. She has been the love of my life, and even though she doesn’t believe it, has had a big influence on me. I returned home to farm in the Newell area–actually in the same section I was born in. In the 60's during the time of Sputnik, I was serving on the local school board when they were unable to find a qualified teacher in the upper sciences. Since my Ag. Ed. degree had approval to teach these courses, I resigned from the school board and became a physics and chemistry teacher. In 1986, Jane contracted a classic case of rheumatoid arthritis. A friend who lived in Glendale, AZ told us about a doctor in Phoenix who had international fame in the field of rheumatoid arthritis. Our daughter was living in Phoenix at the time, so we bought a motor home and came down. I still marvel at how fortunate we were to settle in Paradise RV Park—in the center of all the musical events and talent in Sun City and the surrounding area.”
See more See Less

In Memory Of Kenneth B Anderson