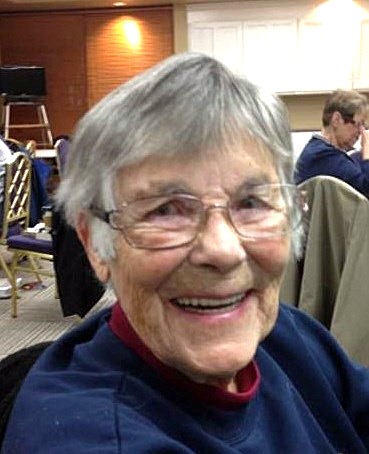 Margaret "Marge" A. Cross, age 88, of Surprise, Arizona passed away on Thursday, May 12, 2022. Marge was born August 29, 1933. To William and Margaret (Dunckel) Kisner. Marge was born in Denver, Colorado, and was raised an only child. She had an array of different interests growing up. From early on she carried a competitive spirit and was a member of both the girls’ basketball team and horse jumping competitions. She fell in love with George, the boy next door, and they were married in 1953. Immediately they started their family, having two boys and one girl. The family they started continues to grow. Marge loved getting everyone together for holidays and special occasions. She would dye easter eggs with the grandkids and would always seem to accidentally drop and egg in her coffee, which has since become a tradition for the kids. She was the hostess for most Christmas Eve dinners, and she would go all out with the good “China”. As kids, one of our first memories of her was watching her race go karts. She became bored with beating women and her competitive spirit carried her to start racing men, where she would beat them too. This same drive carried with her elsewhere and became combined with Marge’s special love for dogs. This led to her obedience training her dogs and showing them competitively, with one Shelty named Andy winning almost every event they entered. She became a trainer, helping others train their own dogs. Those who knew her know she loved to gamble, which came with a love for going to places like Las Vegas and Blackhawk, Colorado. Playing poker became another passion for her, where she would once again play against and beat the men. Over her life she had a lot of varied careers: not long into her life she had a job modeling for an upscale department store in Denver, worked in a local drug store, worked alongside George who raced greyhounds, did data entry for a school system, grew and showed award-winning Violets in her basement, owned and operated a gift shop, bought and sold antiques, and owned and operated a bar/lounge. A celebration of Marge will be held on Sunday, June 5th from 11:30AM until 12:30PM at the Sun City Grand Poker club. 19735 North Remington Dr. Surprise, Arizona. With a luncheon being served during the remembrance celebration. Following at 1PM will be a memorial poker tournament in honor of Marge will be held at the club. With donations going to her favorite charity, "Eye Dog For The Blind" eyedogfoundation.com/donate/#general Fond memories and expressions of sympathy may be shared at www.sunlandmemorial.com for the Cross family.
See more See Less

In Memory Of Marge Cross