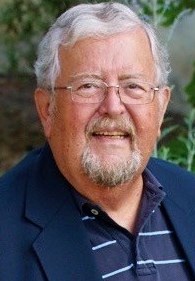 LEMON, Dennis Jackson, 83, formerly of Elburn, Illinois was born December 11, 1937 in Detroit to Cortez and Evelyn (nee Redmond) Lemon and passed away on October 13, 2021. Dennis was the devoted husband to Dorothy (nee Warren), his wife of 51 years; loving father to two sons, Andrew (Michele), and Thomas (Kim). He was the proud grandfather of three grandsons (Maxwell, Weston, and Logan); dear brother to Timothy, and Mary Lou Fleckenstein, and uncle to many. He was predeceased by his second son Thomas, and his older brother Timothy. Dennis graduated from Western Michigan University, where he was one of the founding members of Sigma Alpha Epsilon fraternity. He served in the US Naval Reserve, and was employed at J. Walter Thompson advertising firm in Detroit, and then for many years at Robert Bosch Corporation in Illinois as Sales Promotion Manager, retiring in 2000. In retirement he earned a travel industry certificate and led group tours. An expert downhill skier, Dennis frequently traveled to the slopes in Europe, Canada, and the US. He met Dorothy, the love of his life, in Aspen, Colorado; both were part of traveling ski clubs visiting from Detroit. After marriage the couple settled in Detroit, and later moved their family to Elburn, Illinois where Dennis served as an Assistant Scoutmaster of his sons’ Troop 7, and was a member and volunteer of Elburn Community Church. An avid Chicago Cubs fan, Dennis and his wife Dorothy often traveled to Wrigley Field and Mesa for Spring Training seasons and baseball games; the couple relocated to Arizona in 2001 where Dennis served as a Sundancer volunteer at Surprise Stadium. Watching baseball was one of their shared interests, as was adopting senior dogs in their “golden” years through the Golden Retriever Connection. Going by the pseudonym “Whooper Crane”, Dennis was an active member of the Single Action Shooting Society (SASS) of Arizona where he enjoyed the camaraderie of a large community of cowboy action shooting club friends. He took joy in watching westerns, and created recipes and wrote articles about the Old West for the Cowboy Chronicle newspaper. When Dennis was interested in a subject or hobby he fully engaged in it with enthusiasm. He took great pleasure in compiling genealogy on both sides of his family, and traced lineage of his Scottish ancestors back to Robert the Bruce, and then even further back to 130 BC. Dennis’ life centered around his family, and he especially enjoyed cooking for others; his extra giblet-y turkey gravy was a Thanksgiving holiday favorite. He will be greatly missed and is forever in the hearts of the many people whose lives he touched. A Celebration of Life and Service will be held on Monday, January 17, 2022 at 11:00 AM at Surprise Funeral Care, 16063 West Bell Road, Surprise, AZ 85374 (624) 546-8002. Gifts in his memory may be sent to the American Cancer Society at: https://www.cancer.org or Aspen Hospice (Lori Olsen Mark Foundation for Hospice Care, Inc.) 17505 N 79th Ave, Glendale, AZ 85308 at: https://www.aspenhospice.net. https://www.paypal.com/donate/?hosted_button_id=NTK8X43KK47GL. To sign the guestbook online, to share your memories, and send condolences and well-wishes to the family, please visit, www.surprisefuneralcare.com.
See more See Less

In Memory Of Dennis Jackson LEMON