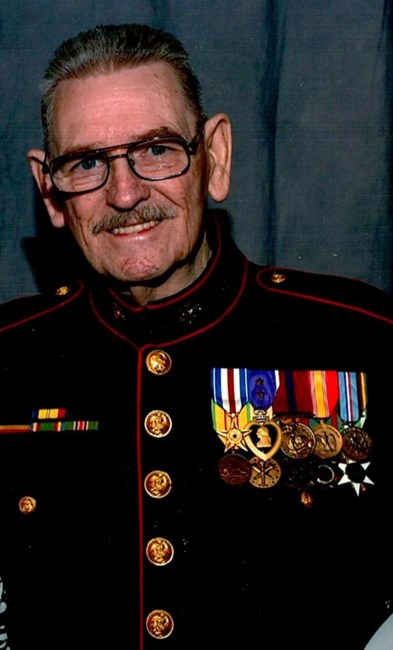 SSGT Lawrence R. Brown, a United States Marine Corps veteran of Vietnam and longtime resident (55 years) of Surprise Arizona, passed away on January 11, 2023 surrounded by family. Larry, as he was known to many in the area, was born on September 23, 1946 in Cincinnati Ohio to Francis and Viola May (Mitchell) Brown and attended Western Hill High School in Cincinnati Ohio before enlisting in the U.S. Marine Corps. As a private, first class for the Marine Corps, Larry served in the Dominican Republic and saw extensive combat action in Vietnam and had many amazing stories of his time there. He spoke of and gave very detailed descriptions of the actions he encountered. Please see below for Larry's biography. The U.S. Marine Corps recognized Larry for his courageous and distinguished service with a Silver Star Medal for his heroic actions in Vietnam on September 5th, 1966. He also received three Purple Hearts and many other awards and decorations for his service there. After the war, Larry returned home and married Claire Rahm on July 4th, 1970. Together, they built a solid marriage with God front and center, This includes career and businesses as well as family time of camping, boating, fishing, bowling, baseball and last but not least involvement with many military organizations. Larry was active throughout his life in many organizations. He belonged to numerous civic, community and Veterans organizations, in most of which he ascended to top leadership positions. More recently he had been the Pack Leader of the Arizona Military Order of Devil Dogs and was the Commandant of the Department of Arizona, Marine Corps League. In 2007, Larry was inducted into the Arizona Veterans Hall of Fame. Larry was preceded in death by his parents and siblings. Larry accepted God as his Lord and Savior. He's survived by his wife Claire, son Jason L Brown, daughters Tyna (Stuart) Anderton and Robin (Jeff) Hummer as well as three grandchildren and one great grandchild. His Niece Karen Gunthner and husband Rob has been part of Larry's life ongoing. His family has organized a memorial service to honor Larry's life and military service, which will be held on Monday, February 13, 2023 at 10:00 AM at Surprise Funeral Care, 16063 West Bell Road, Surprise, Arizona 85374. Following the celebration of life, will be a committal service at 12:30 PM at National Memorial Cemetery of Arizona, 23029 North Cave Creek Road, Phoenix, Arizona 85024. In lieu of flowers, donations can be made to the Marine Corp League. Marine Corps League Department of Arizona Attention: Mike Noble 1500 E Winchester Trail, Camp Verde, AZ 86322
See more See Less

In Memory Of Lawrence Robert Brown