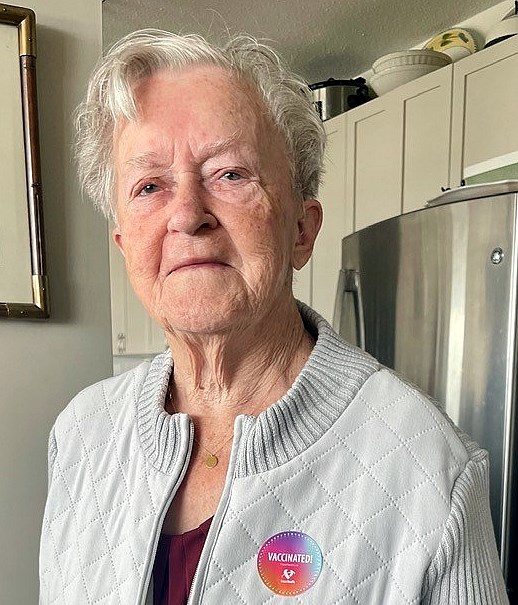 Phyllis Evelyn Fox, née Piper, passed away peacefully on Saturday, September 24, 2022. Phyllis, a steadfast, devoted Mother and friend was involved in many service organizations and causes, including The Order of the Amaranth. She took special pride in raising awareness for Diabetes and Parkinson’s Disease, and in serving on the board of the Michael J Fox Theatre in Burnaby. Born in Winnipeg, Manitoba in 1929, her father, Henry “Skip” Piper, a WWI veteran and customs agent, and her mother Jane “Jenny” Piper, moved the family to BC in the 30’s. She adored her three brothers, Kenneth, Stuart, (both WW2 POWs) and Albert, and her sister Patricia. Phyllis was an active scholastic athlete. Post-graduation she remained in Ladner working for the local paper, the Ladner Optimist. It was there that she met a young soldier at the nearby Vancouver Wireless Station, William “Bill” Nelson Fox. They were married in 1950 and quickly had a little girl, Karen, and then a son Mark, who passed away as an infant. Other children followed: Steven, Jackie, Michael, and Kelli. Bill’s service commitments took them to postings around the country. Like many army wives of the period, she became expert at adapting; new housing, new schools, and new friends every few years. While she held many jobs in all the places the family was posted, when they finally settled in BC after Bill’s retirement, Phyllis settled in for a long stay as payroll clerk with BC Ice and Cold Storage in Vancouver. It’s impossible to overstate the esteem in which she was held, not only by her family, but by all who met her. All agreed that her premarital monogram PEP was an apt one. She was the embodiment of PEP but with substance. Bill passed in 1990, which was a blow, but she doubled down on her commitment to her family and community. Speaking engagements became a specialty and often those she addressed would request her year after year. Phyllis found great joy in being a daughter, sister, wife, mother, nana, grand-nana, and yes, great grand-nan. Besides her husband Bill, all of Phyllis’ siblings predeceased her, as did her son Mark and her daughter, Karen. Phyllis is survived by her loving children: son Steve (Laureen), daughter Jackie, son Michael (Tracy Pollan) and daughter Kelli; her beloved grandchildren: James Westbury, Richard Westbury, Geoff, Kristin Marsden (Paul), Kyle (Kerrie Waddington), Matthew (Maegan), Sam, Aquinnah, Schuyler, and Esmé; her adoring great grandchildren: Chelsea, Megan, Devin, Jesse, Kaylee, Ethan, Kaitlin, Piper, Leo and Joey; and great-great granddaughter Saige. Shortly before passing she was delighted by the news of one granddaughter’s impending marriage, and of another great-great grandchild expected early next year. Nothing made her happier than watching her family grow. For Mom, the world was a wonderful place and she left it better than she found it. We love her very much and we are not alone. No Memorial Service is scheduled yet, but the family will notify once confirmed. In lieu of flowers, donations in Phyllis’ name, in the support of the following causes, all dear to her heart, would be gratefully appreciated: Diabetes Parkinson’s Burnaby General Hospital BC Children’s Hospital Canuck Place
See more See Less

In Memory Of Phyllis Evelyn Fox