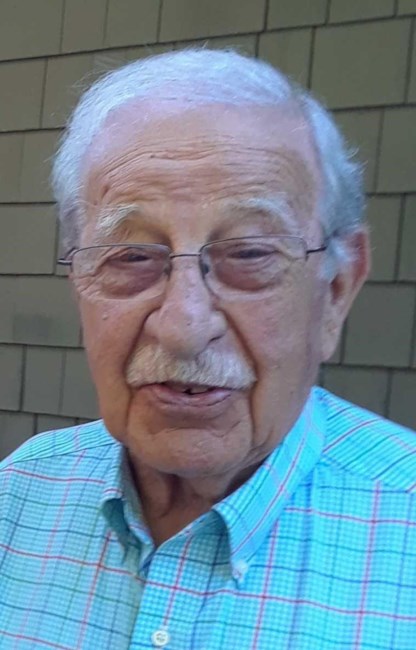 A true renaissance man was lost on January 26, 2021. George Cardono passed at the age of 88. George was the 9th of 11 children born to Beatrice (Laurenza) and Angelo Cardono on January 3, 1933. George grew up on a produce farm in Riverside, RI. He was the oldest child at home during WWII and took a responsible role of bringing food to market at the age of 15. Later, George served as a medic in a MASH unit at Fort Hood, Texas during the Korean conflict. George is survived by his beloved wife, Desire Palmer with whom he shared many wonderful years. They enjoyed traveling to many locations, one of the most favorite being short trips to Plymouth, MA. He loved his children and their spouses: daughter Angela Cardono Cunard and her husband Edward Cunard of Rehoboth; son Mark Cardono and his wife Tracy Sioussat of Andover. He was very proud of his three grandchildren: Sean David McBride, Seth Matthew McBride and Riley Merritt Cardono. He is survived by brothers, Norman Cardono of Cumberland, RI and Angelo Cardono of Downey, CA. He is predeceased by his siblings: Daniel Cardono, Joseif Cardono, James Cardono, Angela Kennedy, Theresa Sherrod, Joan Saxer, Catherine Cardono and Marianna Cardono. George was an extremely creative and talented man. He thrived on challenge, work and purpose. George started out in the outdoor sign industry and went on to start his own advertising agencies in Providence and New York. During this time, he ran many local political campaigns. He was the owner of the Pawtucket Indians baseball team at McCoy Stadium in the 1960s. George went back to the farm life in the 1970’s and 80’s, owning and operating an equestrian facility. He was equally comfortable in jeans on his tractor or in a business suit flying to New York for a meeting. George created and constructed the iconic Big Blue Bug. Upon “retiring”, he took on the challenge of Hillside Country Club in Rehoboth. He designed and built 9 additional holes at the course. His resilience and tenacity were truly displayed as he rebuilt after a devasting clubhouse fire. After selling the country club, George “retired” to yet another career. He earned his real estate and broker’s licenses and founded Blu Sky Real Estate. He was still working part time in real estate up until his death. George enjoyed golfing. He had a standing golf date for many years with his brothers on Thursdays. He traveled often to Bermuda to play. He was an excellent cook and was a member of the “Gourmet 7” club in the 1970s. George was active in the Rehoboth Business Association, the Rehoboth Republican Committee and the Rehoboth Veteran’s Committee. He served on the Park Commission and Housing Authority in Rehoboth as well. George truly enjoyed going out to lunch with his friends and grandsons on a regular basis. For George, the adventure is over. Hopefully the sadness this brings can be replaced with the joy of many wonderful memories. Due to Covid restrictions, the service will be private.
See more See Less

In Memory Of George Cardono