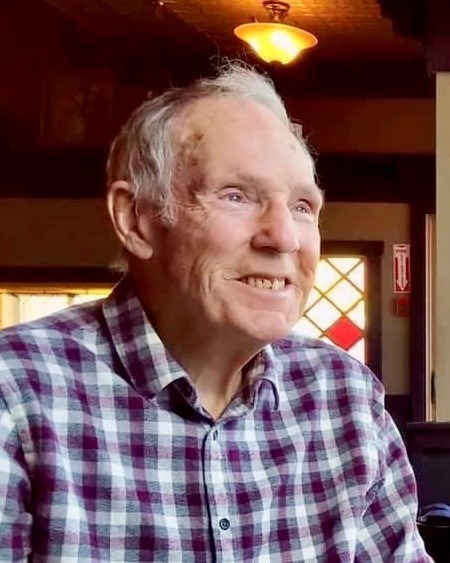 John Colin Campbell (22 January 1935—21 September 2022) was the third of nine children born to Vincent and Viola (MacNeil) Campbell of Sydney, Nova Scotia. He worked a variety of jobs as a young man—loading flour onto schooners bound for Newfoundland at the Robin Hood Wharf, driving a tow truck, delivering building supplies—before an obituary written for a local boxer got him a job offer from the Cape Breton Post and launched his career as a newspaperman. He married Dolores Campbell on 26 December 1963 and had four children—Mary, Susan, Archie and Flora. He lived his entire life in Cape Breton. You now know everything that mattered to him—his family, his work and his island. The immediate family grew to include six grandchildren—Juan Antonio and Alex (children of Susan and Manuel Rodriguez, Quebec City); Rebecca and Nolan (children of Flora and John Lively, Timberlea); and Iain and Ben (children of Archie and Katie Hawkins, Aylmer). But John's extended family encompassed nieces and nephews and great nieces and great nephews and cousins of varying degrees of separation; relationships he could trace with ease, thanks to an encyclopedic knowledge of Campbell genealogy, which would invariably lead him to say, “You know, he’s a cousin of your own.” He was smart and so funny that talk of him, even if it starts in tears, inevitably ends in laughter. His career included 13 years as the editor of the Cape Breton Highlander, a weekly newspaper launched with a number of his siblings—and his soon-to-be wife—in 1963. (As our parents would explain, when asked why they got married on a snowy Boxing Day, it was the only day they had free.) Maclean's Magazine said of the Highlander in 1966: Some readers trust the paper so implicitly they won't even buy a vacuum cleaner at the door without checking with the Highlander. (The Campbells' advice: read the sales contract carefully.) He was a reporter's reporter, whose love of a good story was matched only by his ability to tell it. In 2000, just before he retired, almost 20 of his colleagues at the Post nominated him for an Atlantic Journalistic Achievement Award for his “well deserved reputation for accuracy and fairness in covering the multitude of issues affecting his favourite place on earth.” He won, and in his acceptance speech said the most positive development he'd witnessed over his time in the news business was the arrival of more women journalists, an acknowledgement deeply appreciated by his own journalist daughters. His children all provided excuses for travel and after his retirement, he and Dolores travelled frequently either with them (to England and Scotland and the United States) or to see them (in PEI and Quebec and Aylmer and Timberlea and Prague). But his heart was always and forever in Cape Breton and not just anywhere in Cape Breton but on the Bras d'Or Lakes, in Irish Cove, where his father's family had settled in 1817 and where his father—who spoke Gaelic, a language John later learned—was born. John spent his summers in the Cove from the time he was a small child and passed his love for the place along to his children and grandchildren. Summers in Irish Cove were golden, even this last one, during which his health began to fail. His passing on the last day of the season was no coincidence; he spent almost all of his last summer where he truly wanted to be. He is survived by his wife and children and grandchildren, as well as by his sister Helen and brothers Stan (Margaret), and Brian and sisters-in-law Sylvia Campbell, Gina Ross and Cathy Fedurko. He was predeceased by his brothers Peter and Sandy and Donald and his sisters Anne Marie and Lexena. He will be missed terribly and remembered dearly by those of us who still can't quite imagine a world without him. Visitation will take place at TW Curry Parkview Chapel, from 2-4 & 7-9 on Monday, October 3 with a Funeral Mass at 11:00am on Tuesday, Oct. 4th at St. Marguerite Bourgeoys Church with Fr. Bill Burke officiating. Interment to follow in Sacred Heart Cemetery, Johnstown with a reception to follow in the Johnstown Parish hall. Memories and condolences may be shared with the family by visiting www.twcurry.com.
See more See Less

In Memory Of John Colin Campbell