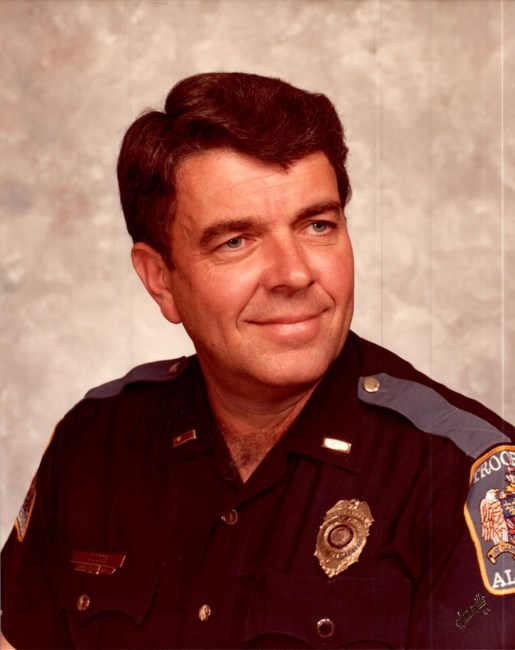 James Shaddix Boggs was born in Ashland, AL on August 15, 1935, to Aubrey Boggs and Eva Shaddix Boggs. He departed this life on January 14, 2023. He is survived by his wife Sue W. Boggs, two children Lisa Renee Boggs and Lindsay Shaddix Boggs, brothers Joseph R. (Liz) Boggs and Audie (Melinda) Boggs, two step-daughters, Gerri Sue Landry (Bobby Druckemiller) and Selena Dee (Kevin) Mobbs, six step-grandchildren, six step-great grandchildren and numerous nieces and nephews. Shaddix loved to remember growing up in Shinbone Valley until he moved to Sycamore where he made many friends while working at Avondale Mills. In 1964, he began his career with the Department of Public Safety, Highway Patrol Division, and served the State of Alabama and its citizens until he retired as a Lieutenant in Montgomery in 1989. After returning to Sylacauga, he continued working for another 17 years as a security guard for Alabama Power Company. Then it was time to sit in the swing when the weather was warm and enjoy Gunsmoke when the weather was cold. He was predeceased by his mother and father, two sisters, Ida Paul (Clyde) Blanchard and Sandra Carlisle, and step-daughter Lisa Kay (Jeff) Willis. A funeral service will be held Wednesday, January 18, 2023 at 11:00 AM at Curtis and Son North Chapel with Rev. Rodney Frost officiating. Visitation will be held one hour prior to the service. He will be laid to rest in Evergreen Memorial Cemetery. Masks will be provided and the family, respectfully, asks that you wear a mask during the visitation and the service. Contributions in his memory may be made to a charity of your choice. Fond memories and expressions of sympathy may be shared at www.curtisandsonfh.com for the Boggs family.
See more See Less

In Memory Of James Shaddix Boggs