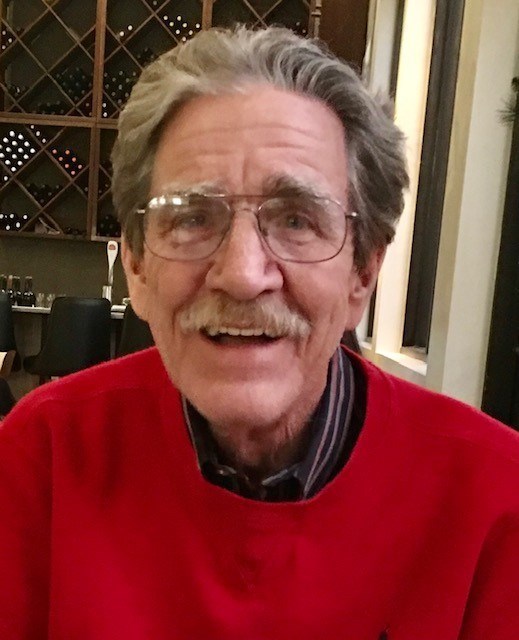 Charles M. “Chuck” Morris of Tallahassee, Florida, was welcomed into the loving arms of his Lord and Savior, Jesus Christ, on Sunday, January 23rd, 2022 at Big Bend Hospice House in Tallahassee, Florida, attended by his loving wife, Debra Silvis Morris, to whom he had been married for nearly forty-four years, and his friends Artesa Washington and Cindy Becker. A man of many talents, Chuck was beloved by family and friends, and respected and appreciated by business colleagues in Florida and Georgia, as well as college buddies from Michigan State University. Growing up in Kansas and Ohio, he played 1st trumpet for his high school band and orchestra (when not playing football or basketball) and, during the summer after graduation, even played with the legendary Stan Kenton Jazz Orchestra, when they visited his town. He received a football scholarship and played college football for famed Coach Duffy Daugherty during Michigan State’s national championship years of 1965 and 1966. Injured in his freshman season, he was converted from a wide receiver to a pulling side guard and enjoyed telling stories about his famous suitemate, legendary lineman Bubba Smith, who later played professionally for the Colts, Raiders, and Oilers. He was a member of the Sigma Chi fraternity and helped them win the intramural football championship at MSU. He has always stayed in touch with his two best college friends, Bobby Baldrica and Halbert Evans, rooting for the Spartans and for each other. Chuck graduated from Michigan State, where he achieved a Master’s in Business Administration, then moved to Ft. Lauderdale, Florida in 1973, with his friend, Bobby. There, he soon found work as Chief Executive Officer for J. P. Taravella, who developed the city of Coral Springs, Florida. Chuck was instrumental in planning and developing that City, and later worked for Westinghouse Communities, Inc., developing properties in Naples, Florida, Dubois, Pennsylvania, and Spring Lake, Florida. In Naples, he started his own consulting firm, but later joined JRB Development Group, which developed The Sanctuary at Bonita Bay. While Debra worked and occasionally played tennis with Australian star, Evonne Goolagong Cawley, Chuck played golf with her British husband, Roger. A Licensed General Contractor and Real Estate Broker in both Florida and Georgia, he later established his own Georgia firm and, in cooperation with others, eventually also worked in real estate development in and around Thomasville, Georgia. After retiring as a Developer, he enjoyed working as a Title Examiner & Consultant for various law firms, especially Silvis, Ambrose, Lindquist & Coch, P. C., in Thomasville. After moving to Ft. Lauderdale, Chuck met the love of his life, Debra Silvis, whom he married in 1978. Having lost his only brother, Michael, as a teenager, and living some distance from his own parents, Henry H. “Hank” and Elizabeth “Betty” Morris, Chuck welcomed Debra’s family into his life, always calling her parents, Harry and Ruth, “Dad” and “Mom,” and becoming close to all of Debra’s extended family, including the families of her brother, aunts and uncles, and cousins. In a testimonial to his Uncle Chuck’s example, his oldest nephew, Tim Silvis, wrote Chuck that he appreciated the “candor” of his life stories, and how as a “tough guy” and “man’s man” he never made excuses, but at the same time was also a “really good cook,” and “funny, affectionate, friendly, and welcoming to everyone in the family.” In the course of developing communities, Chuck managed country clubs, having learned to be a gourmet cook “cooking” his way through graduate school, and enjoyed as hobbies, cooking, gardening (including growing his own tomatoes and herbs), and golf (until football injuries eventually caught up with him). He won the Florida “chili cook off” competition, cooked turkeys for those in need at Thanksgiving, and blessed family and friends with his creations. He provided regular meals for Debra’s parents in their later years. He was active in several churches, and he and Debra served on Evangelism Explosion Teams in Ft. Lauderdale. Chuck was preceded in death by his parents and brother, but is survived by his wife, Debra, of Tallahassee, and by the following other close relatives: Doug & Nancy Silvis of Thomasville, GA; Tim & Kate Silvis and their children, Willa and Alexander, of Atlanta, GA; Kimberly Silvis Cherewick and husband, Andy, and son, Arlo, of Athens, GA; and Todd & Sarah Silvis and their sons, Grayson and Noah, of Thomasville, GA; Aunt Nancy & Uncle Glenn Wolfe of Dubois, PA, and their children, Pam Wolfe Russell and husband, Andy, of Boca Raton, FL and their children, Sarah Anne, Mary Kaitlyn, and Franklin Russell; and Lynn Wolfe McBride of Dubois, PA and her children, Hannah McBride Aughenbaugh and husband, Jesse; and Mitchell McBride and his son, Kael. It is not possible to mention all of the friends who will miss Chuck who is now surrounded by those who have gone before him and the many new friends he is making in heaven. However, those closest to him wouldn’t be surprised to join him in Heaven and find that God is using his cooking talents to help prepare the great Marriage Supper of the Lamb! Due to current conditions, no funeral is planned at this time, and the family is celebrating Chuck’s life in private gatherings. He and Debra have a burial plot next to Debra’s parents at Laurel Hill Cemetery in Thomasville, GA. Those wishing to post a memory are encouraged to do so online via Culley’s Meadowwood Funeral Home at www.culleysmeadowwoodfuneral.com . In lieu of flowers, memorials may be sent to the Lewy Body Dementia Association at www.lbda.org in his honor.
See more See Less

In Memory Of Charles M. Morris