Donations in his name can be made to his beloved St. Marks Wildlife Refuge at https://www.stmarksrefuge.org/donate/. 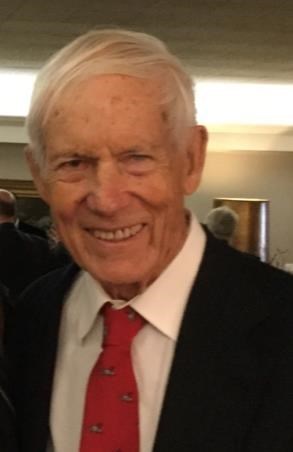 Dr. James (“Jim”) Ellsworth Cavanagh, Jr., 92, of Tallahassee, FL, died of cancer on May 7, 2022 at the Big Bend Hospice, surrounded by family. Born on January 31, 1930, in Plattsburgh, NY, he was the oldest of three children of Dr. James E. Cavanagh, an OB-GYN doctor, and his wife Marjorie, an actress and radio personality. The family also lived in Tallahassee, New York City, and Northampton, MA. A 1951 graduate of Dartmouth College, Jim married Elizabeth Brady of Plattsburgh and went on to complete his medical education at Dartmouth and Harvard (MD ’54). He served his residencies in Cambridge, MA and Hanover, NH before establishing his surgical practice in Portsmouth, NH in 1962. He also spent two years as an officer in the Surgical Service of the U.S. Naval Reserve, Charleston, SC (1957-1959). He moved his practice to Tallahassee and married Susan Beverly Caldwell in October 1976. They later built their dream home overlooking a pond that delighted them with herons, osprey, ducks, woodpeckers, and beavers. Jim was elected in 1992 as a Fellow of the Royal Society of Medicine. Over his decades as a surgeon, he never turned away patients who could not pay, and his home was full of artwork and other items from people who wanted to thank him for his medical assistance. Starting with the institution’s founding in 2000 and continuing through 2021, Jim taught anatomy to more than 2,000 students at the Florida State University Medical School. He was a fixture at the annual “white coat ceremony” that inducts each graduating class into the medical profession; there, standing ovations from his students were the norm. Many will recall his admonition that their singular focus should be “on compassion for the patient rather than on the disease,” and that without taking pains to listen carefully to those patients, “we risk becoming more technician than clinician.” Asked recently by FSU’s Medical School magazine who had originally taught him anatomy, Jim replied “I did.” His resourcefulness and self-possession were legendary; his lifetime award from Dartmouth in 2021 recalled an incident early in his career when, as the only physician available to perform emergency brain surgery on a severely injured 8 year-old girl, he navigated a complex procedure with the assistance of a distant medical school professor with whom he talked by phone during the procedure. His notes indicate that “the patient made a full recovery,” which comes as no surprise to anyone who was ever his patient. Jim was an active amateur ornithologist since childhood and was known for rare bird sightings across North America. He spotted and studied more than 95% of all the continent’s known species and published numerous articles outlining his theories and observations. He and Susan traveled widely, and he loved spending time and sharing stories with his children, stepchildren, and grandchildren. Jim led many family trips to Florida’s Wakulla Springs and the St. Mark's Wildlife Sanctuary, where succeeding generations marveled at dozing manatees, leaping mullets, and an implausibly colorful array of birds (augmented from time to time by hurricane hitchhikers). He served on the board of Planned Parenthood Florida and was active in the Audubon Society. He volunteered as a physician at the Albert Schweitzer Hospital in Haiti. He fought hard in local and regional public service roles to protect Tallahassee’s water resources, and at the time of his death he held a recently renewed license from the State of Florida’s Department of Health, Division of Medical Quality Assurance. Jim’s childhood was divided between Northampton, New York City, and Tallahassee (where, according to his brother John, he logged 200 hours watching movies inside the State Theater “at a total bargain price of about fifteen dollars”). He devoted even more hours to becoming an Eagle Scout. He was assisted in all his ventures by a constant companion named Toby, whom he characterized credibly as “the world’s best dog.” He played high school football as an overachieving if undersized guard, first at Tallahassee’s Leon High School and then at Horace Mann in New York. His linemate and close friend Michael Heyman went on to become Chancellor of UC Berkeley and President of the Smithsonian Institute. His line coach, Vince Lombardi, went on to win the first two Super Bowls as coach of the Green Bay Packers. THAT Vince Lombardi. Jim remained a gifted athlete and a formidable tennis player into his 90s. Jim also was a lifelong fan of the NY Giants baseball team, even when it became the San Francisco Giants, and he knew every corner of the Giants storied New York home, the Polo Grounds. Jim is survived by his sister Julie Kaneta and her husband Keith Kaneta of Maui, HI; children, Ralph (Patricia Remick) of Washington, DC; Robert of Portsmouth, NH; John (Robin Broad), of Takoma Park, MD; and Caitlin Wold of Cape Elizabeth, ME; step-children Mollie Dodd of Tallahassee, Rob Dodd of Denver; and Anna Dodd (Scott Eakin) of Atlanta. He also is survived by six grandchildren: Colette and Hal Cavanagh; Jesse Broad-Cavanagh; and Binta, Maren, and Sonia Wold; as well as a host of nieces, nephews, and cousins A celebration of Jim’s life will be held in Tallahassee in the fall. Donations in his name can be made to his beloved St. Marks Wildlife Refuge at https://www.stmarksrefuge.org/donate/.
See more See Less

In Memory Of James Ellsworth Cavanagh