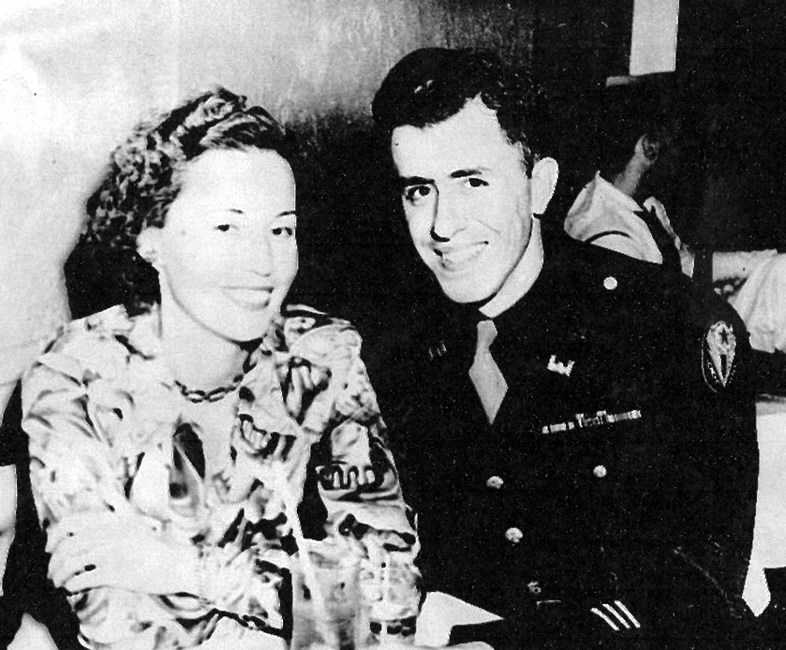 John S. Ripandellli died at his home in Tallahassee, Florida, on June 30, 2018, after a brief illness. He was born in New York City on October 1, 1918, to Ida Gimma, and to Francesco P. Ripandelli, vice-president of a bank in Milan, Italy, knighted by the King of Italy for introducing a technological revolution in accounting throughout the Italian banking system. He attended Townsend Harris High School in New York, and then Columbia University; worked on the literary staff of Crimson and Gold; the French and science clubs; the math team; and earned his degree in mathematics in 1940, with high recommendations from his professors as to his character and mental capabilities. John was drafted in May 1942 and spent two years at Camp Croft Infantry Training School, in Spartanburg, South Carolina, where he met and later married Eleanor Richards, daughter of a businessman in Tryon, North Carolina, in March 1943. John was ready to ‘get into the war’ and with the first call for volunteers for Officer Cadet School and he was on his way. He was sent to Fort Belvoir, VA for Engineer’s Officer Cadet School and upon graduation was promoted to Second Lieutenant and assigned to the 284th Engineer Combat Battalion that was just finishing up Basic Training at Camp Breckinridge, KY. During World War II, he was a First Lieutenant Combat Engineer, Reconnaissance the 284th Engineer Combat Battalion which served under both the US Third Army (General Patton) and US First Army (General Hodges). He had his own jeep, dubbed “Rips Jeep.” He participated in three major campaigns, The Ardennes (Battle of the Bulge), the Roer-Rhine-Rhur campaign (Rhineland), and Central Europe. During the Rhineland Campaign he participated in the battle of the Remagen Bridge, with whole First US army crossing into Germany proper. For his participation in the Battle of the Bulge he received the French Legion of Honor medal (chevalier) in April 2013. For five years, John collaborated, along with other surviving 284th Engineer Combat Battalion veterans, to Mikel Shilling’s book, Silent Heroes (4th edition), a history of the battalion, resulting in cards and emails to John from children and grandchildren who knew little or nothing about their relatives’ WWII history. In 1953, after moving from Asheville, North Carolina, to Tallahassee, he was State of Florida Chief Actuary and Insurance Examiner under J. Edwin Larson (then Insurance Commissioner) resigning in September 1959 to be an independent consultant. Subsequently, he represented the Florida Department from time to time on field examinations, performing loss reserve adequacy reviews. He was also a member of numerous professional actuarial societies, both national and international. In 1967, he vigorously pushed the bill known as the Truth in Lending Act, which passed the Florida State Legislature on July 11, receiving a congratulatory letter from Senator Robert F. Kennedy. Until aged 92, he worked as an independent actuarial consultant, with clients all over the country. He was constantly reading; and writing hundreds of letters to newspapers, to members of Congress, and to TV news media; solving crossword and math problems; and playing piano. He is survived by three daughters: Carol and Diane Ripandelli, and Joan Sizemore; son-in-law Wayne Sizemore; and two grandchildren, Simone and Stephen Sizemore. John was a rare human being and will be missed by many.
See more See Less

In Memory Of John Simon Ripandelli