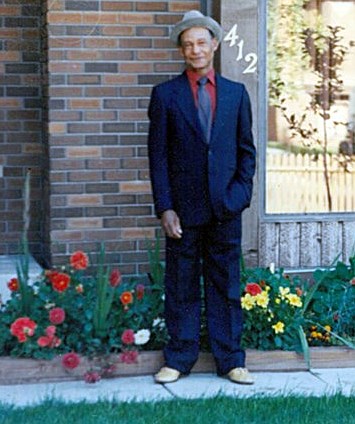 Milton James Melephant was born in Mc Cooks Pen, St. Catherine, Jamaica to Augustus Melephant (deceased) and Maud Melephant (deceased) on February 23, 1923. Milton was the fourth of eight children born of this union. Milton married Lucilda Melephant, the love of his life on January 26, 1946. They had 13 children who learned to live with love, integrity, and responsibility. His Wife was also instrumental in him giving his life to God, as he was baptized soon after. Milton served the Lord by being a Deacon and was also known for his melodious voice as he sang Tenor on the Choir. Milton knew he was gifted to work with his hands, and was a firm believer that, "Whatsoever thy hand findeth to do, do it with thy might” (Ecclesiastes 9:10), so, embracing his God-given talents, he went to Alpha Boys School and mastered in Farming and Civil Engineering. He worked for the Jamaica Parish Council, as the Superintendent for Road Works. Milton was quite thorough and successful in ensuring the daily tasks were done properly, and this earned him the recognition of being called “SUPA”, by his colleagues. Milton was also an avid farmer and referred to by many as a man with a Green Thumb. He was quite successful at rearing goats and planting crops. As a father, grandfather, great grandfather, brother, uncle, cousin and friend, Milton was a confidant, best friend, protector, wingman, jokester, shoulder to lean on, guide, shining light, and so much more. Since moving to the United States to be closer to his Family, he spent the past few years with these skills, enjoying the company of those around him. He loved Kids and never missed a chance to be around and spent quality time with them. Milton could be seen at times smiling as he looked on those around him, with glossy eyes, as he fought the tears of joy and comfort. Milton Melephant lived his life with passion and invited all who were willing to join him. On January 21, 2022, Milton Melephant was called from this life on earth by his Heavenly Father. Milton will be dearly missed for his warm smile, encompassing hugs, infectious laugh, giving heart, genuine friendship, and pure spirit. Until we meet again, he will live on in the hearts of his wife Lucilda Melephant; brother, Emile Melephant; children, Amy Hinds, Evanthia Morgan, Isabel Maylor, Mussolini Melephant, Alonzo Melephant, Novlette Tyson and Khani Melephant: sons and daughters-in-law, Cecil Hinds, Lloyd Maylor, John Tyson, Fay Melephant and Carol Melephant; Grand Children, Everton, Donna, Uriel, Tashmine, Edwin, Renan, Kevin, O’Neil, Mark, Damion, Sean, Carina, Kaylia, Darwin, Ayon, Travis, Nakia, Khani Jr, Amelia, Kayla, Mikhail and Andrea; 23 Great Grand Children, Cousins, Nephews, Nieces, and beloved friends, all of whom will miss him dearly. “Although weeping endures for a night, joy cometh in the morning.” Psalm 30:5 Fond memories and expressions of sympathy may be shared at www.baileymemorial.com for the Melephant family.
See more See Less

In Memory Of Milton James Melephant