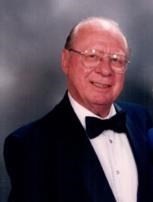 Leonard C. Black World War II Veteran Retired Air Force Chief Master Sergeant March 12, 1927 – January 14, 2023, Age 95 Leonard C. Black was a WWII Veteran preceded in death by his wife of 54 years Betty Black and son Leonard Black Jr., Survived by daughters Barbara Black Entine and Patricia Black Dunmire and family, granddaughter Michelle Entine, his second wife Myriam E. Sanchez Black, sister Geraldine Black Parkman, brother Melvin Black and many nieces and nephews. Leonard was born on March 12th, 1927 in Leesville, South Carolina to Oza Black and Maude Long Black. He was one of nine brothers and sisters. At the age of 18, Leonard joined the military where he proudly served his country for 25 years in the US Air Force and attained the highest enlisted rank of Chief Master Sergeant. In 1946 while stationed in Erlangen, Germany Leonard met Betty Vaupel. A story he loved to tell his family of one of the best days of his life. Betty was from Munich Germany and worked to assist the US Miliary efforts after the war. They soon married and raised a family of 3 children, Barbara, Leonard Jr, and Patricia. The family was stationed in serval cities throughout Europe and the states including Ramstein Germany, England, Chambley France, Washington DC, Long Island, NY and Alexandria,LA and Washington DC. While in the military Leonard obtained a Bachelor’s Degree in Business from the University of Maryland. In 1970 Leonard retired from the Air Force and moved to Tampa, Florida. He owned and operated the Fish’n’Chips restaurant for 30 years located on Hillsborough Ave. He dedicate his life to serve others and was a member in numerous organizations where he held leadership roles and received honors for his outstanding service. Leonard helped in founding the Honor Flight chapter of West Central Florida with the mission of honoring our nation’s veterans by bringing them to Washington, DC to visit the memorials and monuments dedicated to their service and sacrifice. Leonard served as former President of the Veteran’s Council of Hillsborough County and was proud of his work to develop Hillsborough’s Veterans Memorial Park. He was a member of TREA : The Retired Enlisted Association and enjoyed traveling to yearly conventions with family and friends. He also was a member of the American Legion and gave over 50 years of service to the Egypt Shriners of Tampa Bay. In 2013, the Tampa Bay Lightning honored Leonard as the 22nd Lightning Hero where he received a $50,000 donation from the Lighting Foundation for the Honor Flight. And in 2014 Leonard was honored as the Buccaneers “Hero of the Game” for his service to his country and his community. He rang the bell on the pirate ship to “ready the krewe” before kick-off and enjoyed the game from the owner’s suite. Leonard was a devoted member and Elder of the Chapel in the Pines Presbyterian Church in Tampa where he had led the church food bank for many years helping to feed local families and donate to the Metropolitan Ministries. A loyal fan of the Tampa Bay Buccaneers, Leonard held season tickets since the inaugural season and loved attending home football games with his family. He was a true football fan and would watch games throughout the football season. As a tribute to his service, a brick has been laid in honor of Leonard at the World War II Museum in New Orleans, LA Leonard was a true American hero will be remembered on Thursday January 26th with viewing at 10am/ funeral service at 11am at the Blount & Curry Funeral Home of Carrollwood located at 3207 W Bearss Ave. A burial with full military honors will take place at Myrtle Hill Memorial Park Cemetery after the service.
See more See Less

In Memory Of Leonard C Black