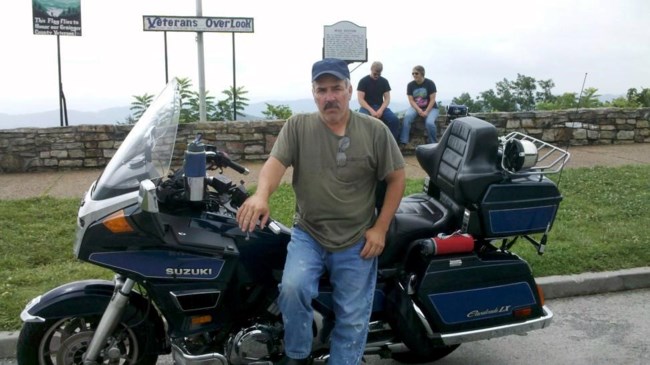 Bret Walker, age 59, of New Tazewell, Tennessee passed away on Wednesday, September 8, 2021. Bret was born February 16, 1962. Bret knew Jesus Christ as his personal Lord and Savior and boldly shared his faith. Beloved husband, father and grandfather. Bret is survived by his wife of over 36 years Becky, daughters Samantha Mullins, Jackie Carter, Alexandria Malone, and Melinda Smolinsky, granddaughters Charlotte Mullins and Gabby Smolinsky, son Joey Walker, sons-in-law David Mullins, Brandon Carter, Andrew Malone and Mike Smolinsky, mother Ann Walker, brothers Eddie and Kevin Walker, sister Kelly Walker and enormous nieces and nephews. He was preceded in death by his father Howard Walker, SR. Bret was multitalented. He loved playing his banjo, guitar and mandolin. He was an excellent video editor. His artistic creativity knew no limits. He spent over ten years teaching martial arts to hundreds of local children. He was also the creator and director of Team Trinity Martial Arts Ministry. Bret’s accomplishments were too numerous to mention. He was a private pilot, blackbelt, accomplished self-taught musician, electrician, EMT. His favorite activities were spending time with his family, playing music, riding his motorcycle, boating, studying history, studying the Bible and traveling. He was always learning. His greatest joy was being Pawpaw to Charlotte and Gabby. Bret was the force behind our lives. He led from behind. He always stayed in the background pushing all of us into the spotlight. He was never recognized for his greatest accomplishments. He was the creator of The Hillbilly Kitchen. As a result of his efforts behind the scenes sharing the Gospel at Team Trinity and The Hillbilly Kitchen millions have heard the Gospel and thousands have come to know Jesus Christ as their Lord and Savior. Bret proudly served his country as an MP in the US Army in the 1980’s. He had four careers that followed. He was an auto frame technician, an HVAC technician, EMT and a video editor. He was the best at everything he did which is the legacy he leaves to his children and grandchildren. He believed that there was no point in being anything less than the absolute best and perfection was attainable in everything. We know that Bret fought the good fight and the Lord welcomed him with “Well done good and faithful servant.” The family will receive friends from 2 until 3 p.m. Sunday September 12, 2021 at Coffey Funeral Home in Tazewell, TN with funeral service to follow at 3 p.m. Sunday in the Coffey Funeral Home Chapel. graveside service to follow in the Fairview Cemetery. Minister: Rev. Bill Duncan; Singers: David Honeycutt and Mitchell Cosby; Pallbearers: Samantha & David Mullins, Alexandria & Andrew Malone, Melinda & Michael Smolinsky. Coffey Funeral Home in charge of arrangements. Fond memories and expressions of sympathy may be shared at www.coffeyfh.com for the Walker family.
See more See Less

In Memory Of Bret Walker